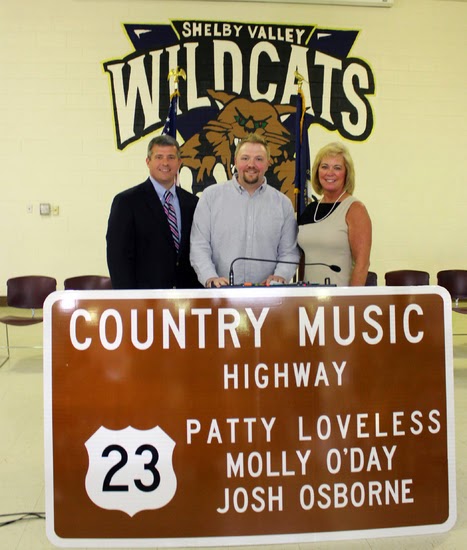 Nashville, TN ... (Friday June 13, 2014) ... Black River Publishing’s GRAMMY-winning songwriter Josh Osborne was honored in his hometown this week in celebration of the joint resolution passed by the House of Representatives and the Senate adding the Kentucky native’s name to the US 23 Country Music Highway in Pike County. The home state honor was hosted on Wednesday by the Highway District 12 of the Kentucky Transportation Cabinet and occurred as Josh has four singles are almost entirely in the Top 20 on the country music chart.

“This was truly an honor for us,” shared State Rep. Leslie Combs. “To be able to do this in honor of Josh, and what he has accomplished, is a tremendous honor for us and one of the greatest ones we’ve had.”
During the official ceremony at Shelby Valley High School, Pike County Judge/Executive Wayne T. Rutherford honored the alumnus with an additional presentation.

“Where we go and what we do around this country, we are ambassadors of where we come from,” stated Pike County Judge Rutherford. “Before I left the office today, I signed an executive order declaring this [June 11] as “Josh Osborne Day, Pike County Kentucky.”

“Growing up on Country Music Highway, knowing how much all those artists have influenced and inspired me, and now to think that I am even a small part of that heritage means the world to me,” shared Josh. “I honestly don't think any honor could mean more to me.”

Upon accepting these great honors, an emotional Osborne stated, “When something like this happens, and you reach a milestone, you kind of think. ‘How did I get here?’ I look around the room, and I know how I got here, so I thank all of you.”

Among the hometown crowd was Black River Entertainment’s CEO, Gordon S. Kerr; VP of Black River Publishing, Celia Froehlig; and other staff members. Also in attendance at the official ceremony was GRAMMY award winner and 2014 ACM Songwriter of the Year, Shane McAnally (Downtown, KissTomorrow Goodbye) and ACM, CMA and GRAMMY nominated songwriter Brandy Clark (Better Dig Two, Mama's Broken Heart). Both close friends and co-writers of Osborne, the two of them joined Josh at the Hilton Garden Inn that evening to perform a songwriter’s round sponsored by Johnson Industries, benefitting The Pike County Schools’ K.I.D.S. initiative.

The home state honor comes on the heels of Josh’s astonishing eight weeks of having five singles in the top 30 on the country music chart. Currently, Josh’s singles include Blake Shelton’s "My Eyes," closely followed by "We Are Tonight," Billy Currington; "Chainsaw," The Band Perry; and Eli Young Band's, "Dust."
Posted by LovinLyrics at 11:53 AM