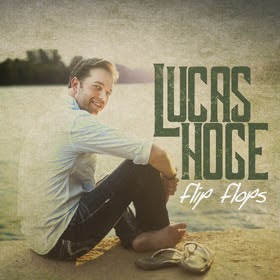 "This track is upbeat, fun and truthful. My buddy had the idea for the song title and I wanted the message to reflect my life on the farm in comparison to the first time I saw the ocean," Lucas Hoge introduced. "The line 'this girl on my arm has never seen a farm and she couldn't believe I'd never been to the ocean' is written from a chapter of my life 10 years ago. That 'girl' became my wife and when she heard I'd never seen the ocean, she made flight reservations that very day for us to head to the west Coast!”

The toe-tappin’ melody and easy-does-it lyrics will take listeners to “Five O’clock Somewhere” where “No Shoes, No Shirts…” are no problem:

The latest offering comes from Hoge’s upcoming EP intended for an early Fall 2014 release.  [Hoge is currently writing and working alongside producer Matt McCLure (Lee Brice/HARD 2 LOVE); the creative pair is scheduled to head into the studio in the coming weeks.]

Hoge is no stranger to large audiences on the big screen and center stage, in print, and over radio airwaves. An all-around entertainer, Hoge continues to pioneer the path as a contending major indie artist. His reputation as a motion-moving performer, clever lyricist and stand-out vocalist precede him as he transcends borders into the acting arena; Hoge starred in Animal Planet’s Last Chance Highway and played the feature role in Clinton Gregory’s video “Too Much Ain’t Enough.”  With music at the forefront, his versatile artistry has landed him appearances on The Today Show, Inside Edition and he has graced the pages of People Magazine and Country Weekly; he has performed abroad and at some of country music’s biggest events and venues (CMA Fest and the historic Ryman Auditorium).