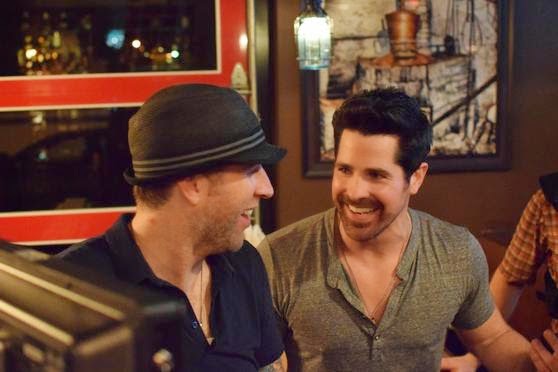 Additionally, Hodges will participate in a Twitter Chat with CMT at 11am CT today.  Fans can ask questions by using #CMTJT.

“This video was fun for me to do for several reasons,” Hodges said.  “First, I got to hang out with lots of friends at a bar, so how can that be a bad thing?  We even had to take a break and hunker down when one of those wild Tennessee summer storms blew through. Next, I got to work really closely with Mason in conceptualizing this video.  I wanted it to have a light hearted, fun feel to it and look like a typical night out on the town, except here, I’m just trying to say goodnight to my buddies and get home to my really hot wife! Luckily, I convinced my really hot wife Kasey to play that role in my video. It took a lot of pleading, but I finally got her to say yes.”

In addition to his wife Kasey, Hodges’ video features another family member, his Australian shepherd, Dax. “Dax didn’t take a lot of convincing and works for peanuts, or should I say jerky treats,” Hodges said. “This is old hat to him, as he’s already had a role in a movie called The Sophisticates. He loved being on set because there were so many new people to get attention from. He's such a ham.”