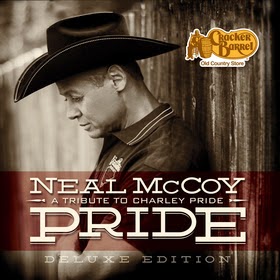 LEBANON, Tenn. (Sept. 30, 2014) – Cracker Barrel Old Country Store® and fan-favorite country music artist Neal McCoy announce the upcoming CD release of Pride: A Tribute to Charley Pride: Deluxe Edition, which will be available on Nov. 3 exclusively at all 633 Cracker Barrel Old Country Store® locations and online at crackerbarrel.com. The digital album will also be available for purchase at select digital retailers. Pride: A Tribute to Charley Pride: Deluxe Edition contains two exclusive bonus tracks not found on the original edition that was released in 2013 by Slate Creek Records. The album contains McCoy’s versions of 13 songs made famous by the legendary Pride, and will sell for $11.99. Highlights include McCoy performing duets with three of country music’s greatest voices. McCoy sings “Roll On Mississippi” with Trace Adkins, “I’m Just Me” with Raul Malo, and Pride’s signature song (which earned songwriter Ben Peters a GRAMMY Award in 1972 for Best Country song), “Kiss an Angel Good Mornin’” with Darius Rucker.

“I wanted to open people’s eyes about Charley and remind them of all that he has accomplished,” said McCoy. “I thought the best way to do that was to just put his music out there and let people hear what great country music sounds like. I am, and always have been, a huge fan of Cracker Barrel® and I am proud to join their exclusive music program and release a Deluxe Edition of this album so that more people can be reminded of Charley’s amazing musical legacy.”

“Cracker Barrel is excited to welcome Neal McCoy to our exclusive music family and join him in his mission to shine a spotlight on his mentor, the great Charley Pride,” said Cracker Barrel Marketing Manager Julie Craig. “We know our guests will enjoy Neal’s album and we are happy to bring it to them in an exclusive Deluxe Edition.”

Pride: A Tribute to Charley Pride: Deluxe Edition was produced by veteran music producer Garth Fundis who, as a young studio engineer, was present for many of Pride’s original studio sessions with producer Jack Clement. The 13 songs on the album are:

The legendary Charley Pride is one of the country music’s most successful singers, having achieved 29 No. 1 hits and three GRAMMY Awards (including Best Country Vocal Performance, Male in 1972). He was named the CMA Entertainer of the Year in 1971 and CMA Male Vocalist of the Year in 1971 and 1972. Pride joined the Grand Ole Opry in 1993 and was inducted into the Country Music Hall of Fame in 2000.

In 1981, Pride was introduced to McCoy after the younger singer won a nightclub talent contest in Dallas and soon hired the newcomer to be his opening act at his concerts. McCoy continued to work for Pride until 1986 when he left to pursue a recording contract. McCoy is best known for his two No.1 hits, “No Doubt About It” and “Wink,” as well as for songs such as “For a Change,” “They’re Playin’ Our Song,” “You Gotta Love That,” “Then You Can Tell Me Goodbye,” and “The Shake.” He has earned three Platinum and four Gold albums. Currently McCoy is touring with Blake Shelton on the “Ten Times Crazier Tour.” For more information, visit nealmccoy.com.
Posted by LovinLyrics at 11:05 PM