WAY BACK WHEN WEDNESDAY - "I FEEL LUCKY" - MARY CHAPIN CARPENTER 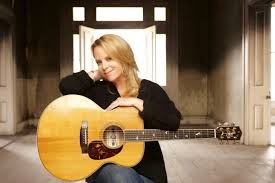 It’s nearly Halloween and with that a Way Back When song that matches our lust for the holiday and all that it embodies. The zest for luck, for free candy that we are to willingly accept from strangers as children in our Halloween best. The costume we’ve stressed to exemplify our creative side and pay homage to our favorite characters. Upon growing up, we’re rewarded with grown-up candy and a reason to celebrate with our friends and get a little rowdy, our costumes still representing our creative side (and on some are pretty much the same size.) Any other day it would seem strange to accept a shot from a serial killer or candy from a stranger. We shall trust in the holiday for this celebration and this celebration only. For today we shall seize our luck regardless of the circumstances or superstitions presented to us. Luck, superstition and lore are as old as time itself, as old as stories themselves are. This song however, appeared first in 1990. On VHS, no less! An antiquated form of media that has yet to make the resurgence that vinyl is making. After that, it appeared on Mary Chapin Carpenter’s third album, the Grammy-winning “Come On Come On.” Yes indeed, it is the famed and beloved “I Feel Lucky.”

“I Feel Lucky” was written by Mary Chapin Carpenter and Don Schlitz. One of Mary Chapin’s better known songs, it’s a song about finding your own luck and refusing to quit even when it looks ominous. She takes risks when both common sense and superstition would tell her not to and it pays off. She ends up a multi-millionaire with her celebrity crushes on either side of her. Growing up, Mary Chapin was right alongside with the Judds as one of my favorite female voices. That has not changed, not only can she belt it out but she can tell a story like no other! This Halloween let’s follow the examples of Carpenter and Schlitz and seek out that what we most want. Even if it seems impossible remember that it’s Halloween and anything can happen! At the very least you could end up with a prop lotto ticket and 2 guys (or girls) dressed as your celebrity crushes. Regardless, dress up, go out and make your own luck! Have a helluva night even if it’s just watching all the creatively garbed stumble about.