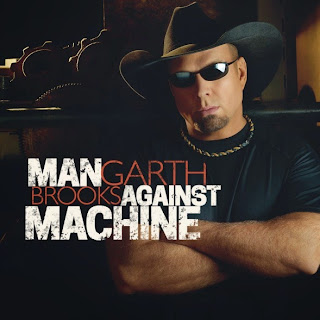 I just have to start this review off  in the words of the immortal Madea, HALLELUYER! Garth Brooks officially made his comeback announcement over the summer and he's done a few tour stops, but THE MAN came in like a raging lion this week and made his presence known with the release of his long awaited comeback CD, "Man Against Machine" and he swooped in like the country music behemoth he is and, for the first time, took over the social media world, adding over a million likes on Facebook within only a few hours. The talk of the music world is now "11/11/14" and the day country music took a stand and the fans stood strongly with it. I feel a revolution coming on and &!$%! does it feel good!

With a carefully selected collection of new music, Garth has planned this album with precision and quality. If you're looking for "Fireball", "tailgates", and "white tank tops" here, you're not gonna find it. That's not what Garth is about, he's never been about shallow, his music has always reflected his depth as an artist. What you will find here is human emotion, a sense of pride, respect and story telling done only the way Garth can do it and music that is a variety of different content and style. Garth has always been known as a gentleman, not only in his every day way of approaching life and treating people, but in the music he chooses to release. He's ready to bring manners, courtesy, dignity and admiration back to the genre as a whole and to try to bring the listener appreciation back to the music itself, the writing, the performance. What you will find here isn't all twang, fiddle and steel, you will find those mixed in with strong guitar riffs, a thick heartbeat of percussion, an "amped up" version of the Garth we all fell in love with decades ago and that familiar voice, that while not perfect, is a little weathered from the years, but is one that still takes you "home". What this cd represents is literally what the title says, "Man Against Machine", one man who is tired of the establishment, the "new thinking" of Nashville and the fact that the focus has drifted from creativity and making credible lasting music to simply making another buck for the overstuffed corporate wallet. Whether you like Garth or not, you have to love that he's willing to fight for what he and millions of country fans believe in, the music and the ideals that represent country music. We're ready for the fight.

Songs to Pay Attention To:

"She's Tired of Boys" - Written by Amanda Williams whose father wrote many of Garth's big hits.
"All American Kid" - Written by Craig Campbell, that's an added bonus right there!
"Mom" - This one brought an entire studio at Good Morning America to tears, fair warning.
"Send 'Em on Down the Road" - The title says it all.

I give it a big country YEE HAH and a tip of the Stetson for doing it right.

Posted by LovinLyrics at 6:32 PM