ERIC CHURCH HAS HIS "LIMITS" 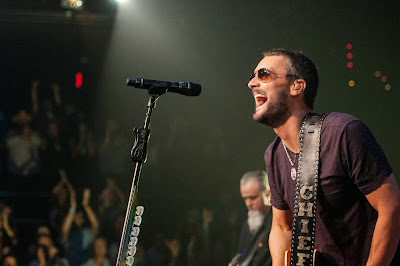 Famous for a game changing live show, Church performs songs from his critically-acclaimed, chart-topping 2014 album The Outsiders in his ACL debut. The music rebel’s distinctively hard-rocking spin on country, influenced as much by AC/DC and Metallica as Merle Haggard and Waylon Jennings, has earned him a huge audience outside the confines of country radio. Church appeared on the cover of Rolling Stone this year and was named one of their “50 Greatest Live Acts Right Now.” NPR raves, “Eric Church is working on a level that few other country artists of his generation can touch.”

“This is gonna be fun,” says the North Carolina native, clearly enjoying his first visit to the ACL stage. Church's appearance is a twelve-song tour-de-force that presents the performer at the top of his game. Delivering a host of hits in his trademark aviators, Church’s crowd-pleasing set is filled with anthems about youth, family and outliers that ignite through songwriting skill, powerful riffs and energetic vocals. Highlights include the rebellious “The Outsiders”, the autobiographical title track “Sinners Like Me” from his 2006 debut and the Grammy-nominated anthem “Springsteen” from his 2011 breakthrough Chief, with the Austin audience providing the “whoa-ohs” of the chorus. Church brings it all home solo, showcasing his softer side with the heartfelt set-closing ballad “A Man Who Was Gonna Die Young.”

"Eric and his band know how to rock harder than many rock ‘n roll bands," says ACL executive producer Terry Lickona, "and his music and the words behind it have a way of reaching fans way beyond the usual borders of country music. He's a perfect fit for ACL."

"Give Me Back My Hometown"

"A Man Who Was Gonna Die Young"

The complete lineup for the full thirteen-week season, including six new episodes to air beginning January 3, 2015, will be announced in the coming weeks. Check the news section of acltv.com for additional episode updates.

Posted by LovinLyrics at 9:52 AM