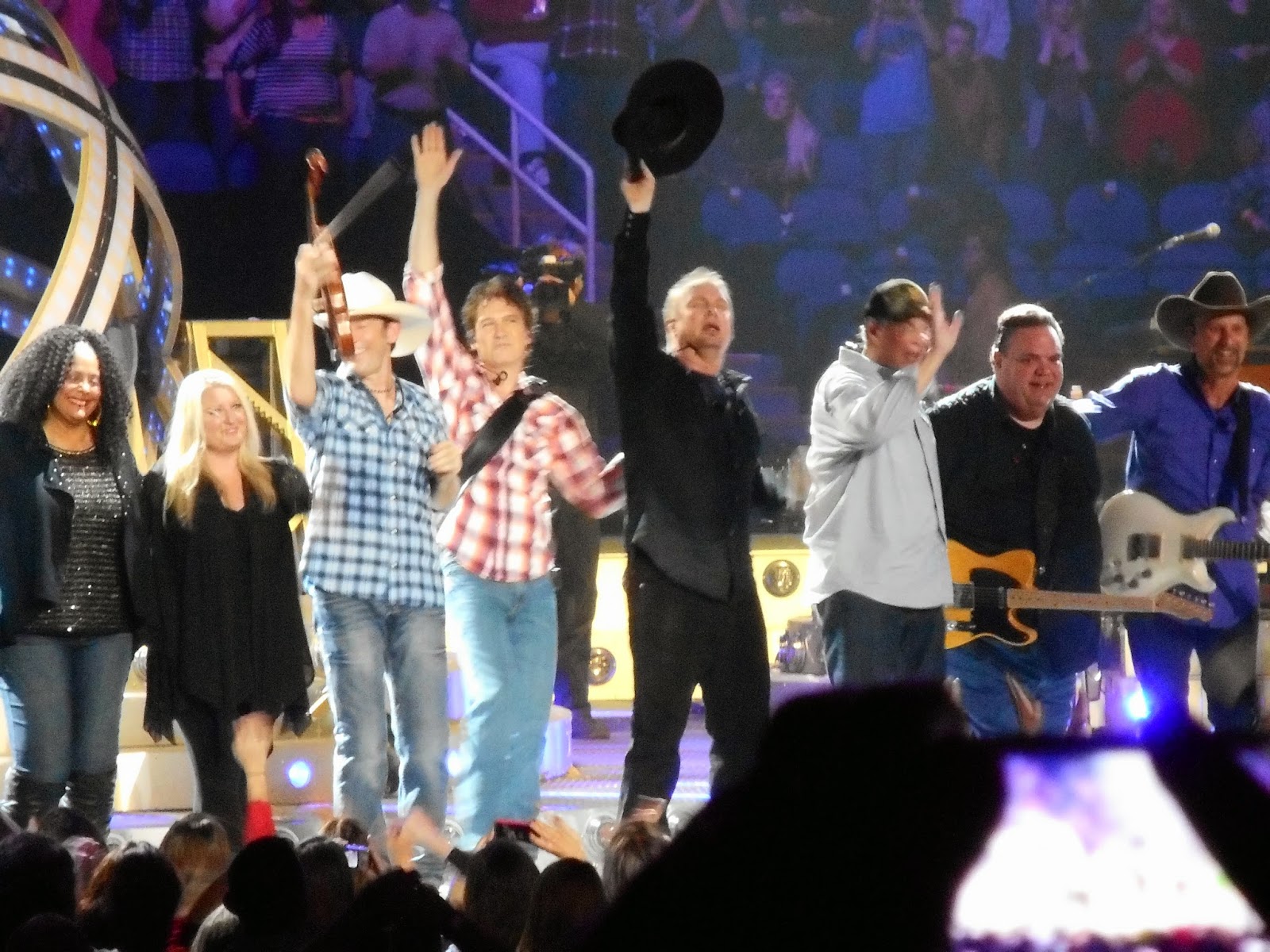 Back in the 90's, my musical "Must Do" was see Garth Brooks. That never happened. When I first heard that Garth Brooks was heading back on the road this year after years of retirement, my first thought was "I MUST cross this off the top of my bucket list!" Well, I can now say that I have crossed the #1 item off that bucket list and it included an extra bonus of Trisha Yearwood! Garth made it affordable at a standard ticket price of only $67.00 for tickets for ALL seats, at least at my venue. If I were to leave this earth today, I would leave it with a huge grin on my face and a huge smile in my heart. It was a chance to relive the days when my worries were few and my good times were many, a chance I probably won't have again. It was a reunion of sorts with my past, one that brought back memories and unlocked doors that hadn't been opened in years.

This weekend, Sunday, 11/23/14, the only thing it took to get my "Sundaze" on and stoned at this show was the music, the passion of the artist and the fans. To put it bluntly, this was the best orgasm a country fan could ever have, it even made me want a cigarette after and left me with an obvious glow. This was great sex is a musical way. This was more than a show, this was an out of body experience, a connection that only Garth Brooks can make. This experience was truly about "people loving people", blaming it all on our roots, singing off key, loud and "shameless" and just roping the musical wind in one hell of a country music "rodeo". It was a family friendly event, one you wouldn't be have to be concerned about taking your kids to see. When I looked around this area, I didn't see people so drunk they were spilling beer on other people, they weren't so wasted that they couldn't enjoy the music .. this wasn't about "Burnin' It Down" and seeing who could reach their "Tippin' Point" first, it wasn't about pickup trucks, cut off faded blue jeans or Fireball Whiskey, this was about a night about the music itself and being able to enjoy it and remember it well after the first couple of songs. We'll remember this one for years to come. This was 3 hours of not listening to the misery of the world outside those arena doors, not worrying about how we were going to pay our next bill, not worrying about health issues or any other negative thoughts we would otherwise normally be thinking about, this was time with each other welcoming back one of the biggest artists in country music and welcoming back country's tradition with open arms and open hearts. For me personally, there is no other place I'd rather spend a Sunday night - just listening to the man that was instrumental in filling my heart with a love for country music, spending just a little bit of quality time with someone that I love, and simply appreciating the music that made me who I am. There was one added bonus, our seats were randomly upgraded! The only thing I can complain about is that the night came to an end, but even so, the memories never will.

It's been 16 years since Garth was last in Greensboro and man was it worth the wait! He hasn't lost a beat. He might have lost a little hair and his voice has an aged quality to it now, but the experience was pure Garth then and pure Garth now. The stage set up was incredible, the light show was fantastic and it was Garth as only Garth would do it, the bigger the better but yet he still manages to keep it simple and about the music. First up was Karyn Rochelle, which was a huge surprise for me because I have been a fan for a long time, following her songwriting career the past few years out of Nashville. I never knew she was an NC native from Wilmington. She was fantastic, such a strong vocalist and a great stage presence. She performed her original music including "Jezebel" and "Red High Heels" which was cut by Kellie Pickler and was her breakout hit. I highly recommend her new self-titled CD. Her song, "Better Off" is my new theme song ;-) 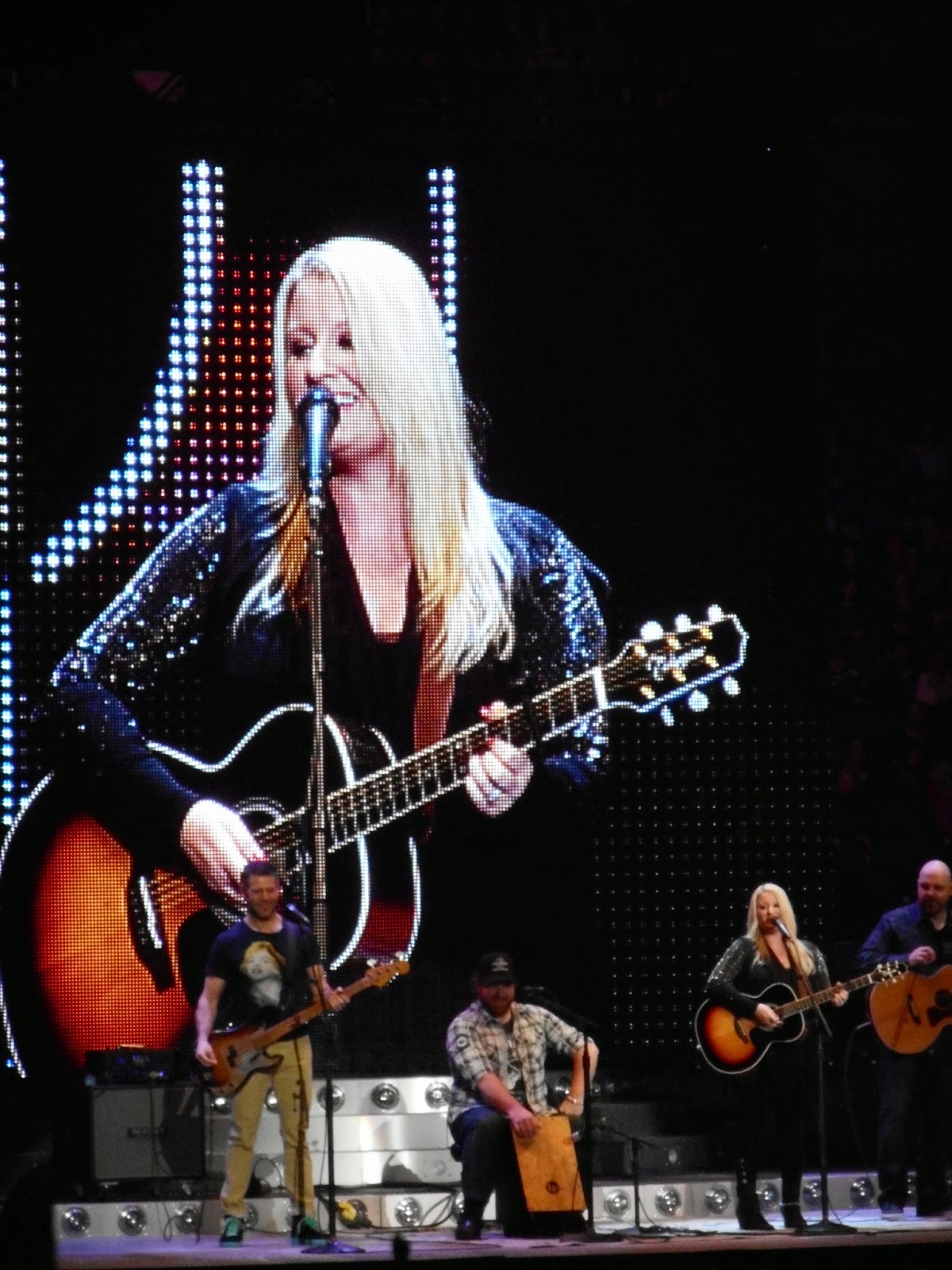 When Garth hit the stage to the mechanics of "Man Against Machine", the decibel level in the coliseum went to unheard of levels, the floors rumbled with the thunder of the applause and the excitement was beyond description. It's something any country music fan should experience at least once. Even if you weren't a Garth fan coming in (what?), you will be when you leave. He was all over the place, climbing on the stage props, singing to each side of the stage so EVERYONE got a chance to see him and not just those on the sides and the front. I was prepared to stand and to sing, but not like this! We pretty much stood the entire 3 hrs and sang so loud that our throats hurt. The passion that he brings to a performance is infectious, you can hear it in every note he sings and it spreads to the audience in every word they sing right back. He displays such an appreciation for country music and for the foundation it was built on and he reminds you of exactly why you fell in love with country music to begin with. These days, and I know country music has to evolve, but it's hard to sometimes remember what's so great about it. Artists like Garth are what's so great about it. Is he the best vocalist, no. Is he the hottest guy with the tattoos and earrings, no. Whether you agree with his politics, his view on how he handles his business, his stance on today's music or blah blah blah, what you can't disagree with is his deep love and appreciation for music and those that support him. It's in the smile on his face throughout the show, it's in the tone when he sings songs like "Unanswered Prayers", it's in his tear filled eyes when an area full of people sing "The Dance" and he just stands there listening. After seeing a live show, you really can't help but be a fan. He did all of the songs that made him one of the biggest names in country - "Rodeo", "Shameless", "Papa Loved Mama", "Calling Baton Rouge", "Two of a Kind Working on a Full House", "Much Too Young To Feel This Damn Old", "Beaches of Cheyenne" and more classics. He also broke out the big guns with "Friends in Low Places" which included tons of confetti, streamers and the infamous "3rd verse". Now THAT was a good time! I apologize to those around me for my horrendous vocal ability, but I was gonna sing and I was gonna sing it LOUD. The only other new song he performed was "People Loving People" which was a satellite performance during the American Music Awards being broadcast the same night. This night was about the good stuff, the stuff that took him from bars in Oklahoma to the top of the Billboard charts. It wasn't about hawking a new album, it wasn't about making a statement, it was about a good time. 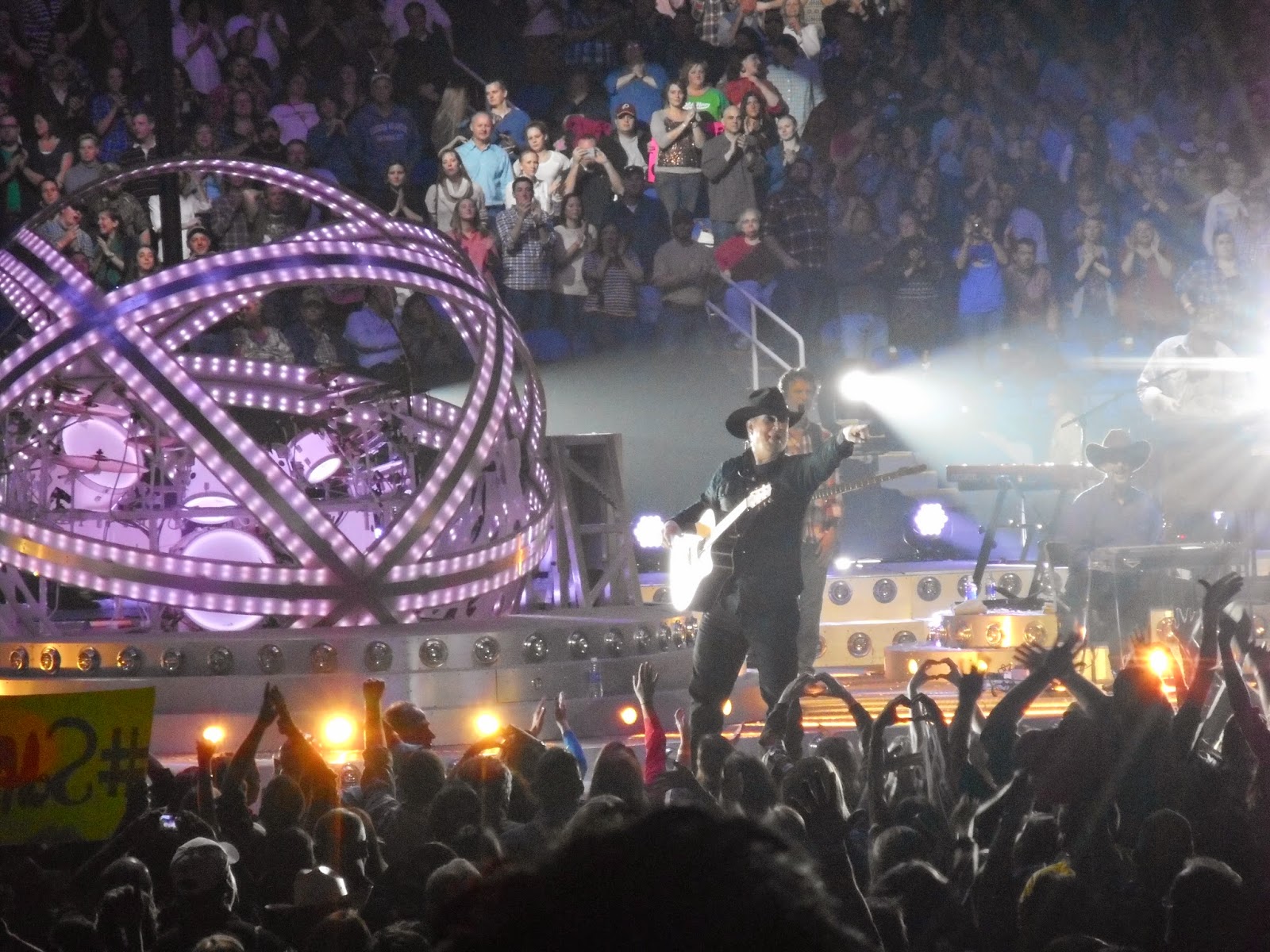 When Trisha came out from the shadows to sing "In Another's Eyes" with Garth, the thunder rolled again. These people were LOVING this. Her voice is still clear and strong and she's absolutely gorgeous. She did a few of her songs like "How Do I Live", "X's and O's", "She's in Love with the Boy" (which was great with an audience "kiss cam" focusing on random couples in the audience and the women were kissing the "boy" they loved on the big screen.). She focused in on a fan in the audience holding a sign about her 9 year old son being cancer free, she dedicated her new single "Prizefighter" to that fan's son, Ryan. Her next song was "Georgia Rain", which was written by Karyn Rochelle, so she brought her out and asked her to sing along with her to which she obliged. By the end of the song, Karyn got a little emotional and choked up, Trisha jumped in and hugged her, helping her through to the end. It was a great moment for everyone to see a girl from NC living her dream. 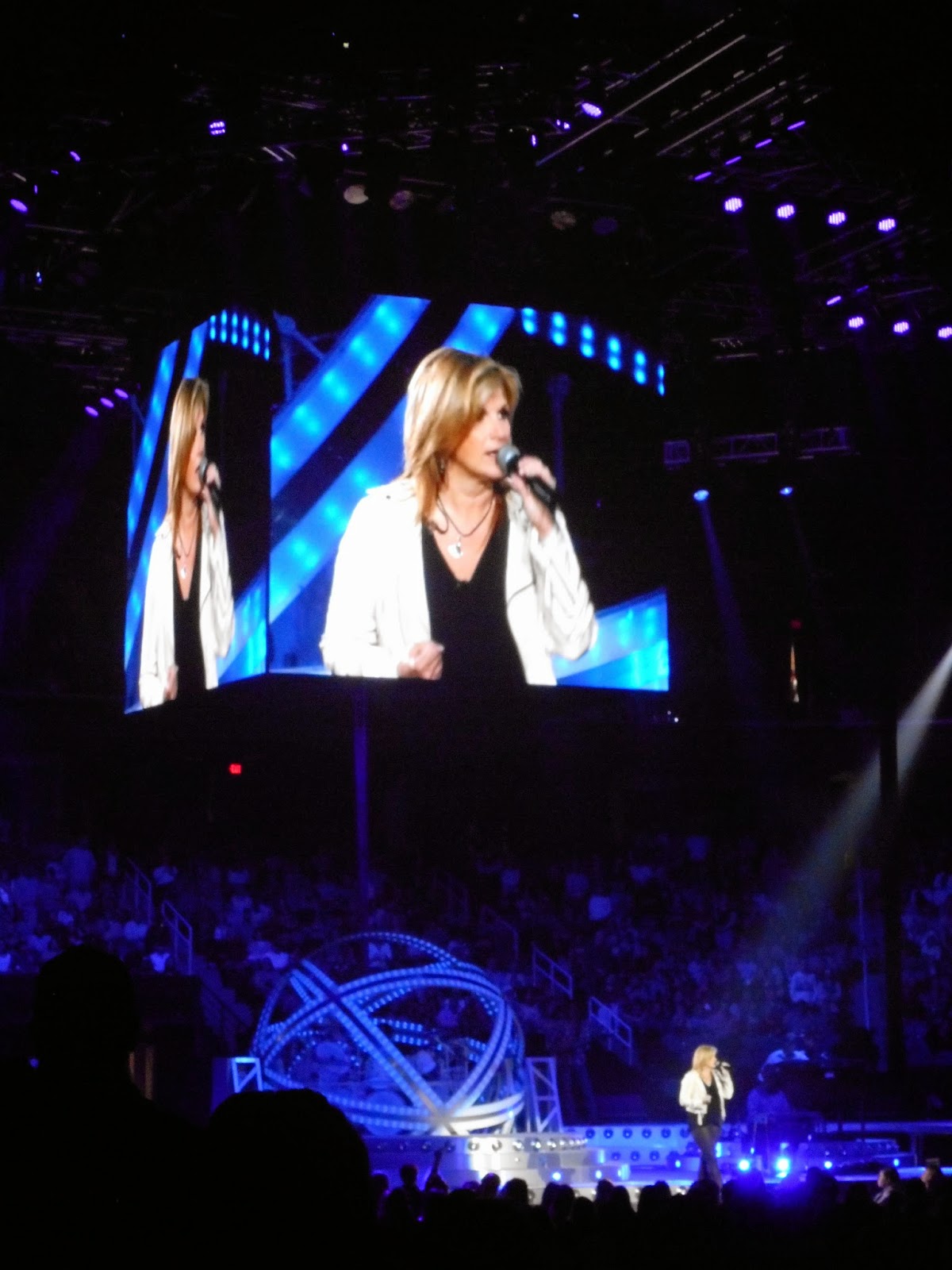 The end of the show brought 2 amazing encores, including a heartfelt duet between Garth and Trisha of "Walkaway Joe".

I'd personally like to say thank you to Garth and Trisha for starting the curve to bring country back full circle, for giving fans a chance to appreciate the music again and for the 3 hours "outside of the real world" and immersing us into a world we've missed for so long.

If this tour comes to your area, GO! If you have to sell a kidney on the black market to get there, do it. It will leave you with a new appreciation and respect for the genre that seems to have lost both over the past few years and will make you wanna scream HELL YEAH just because.

Posted by LovinLyrics at 4:18 PM