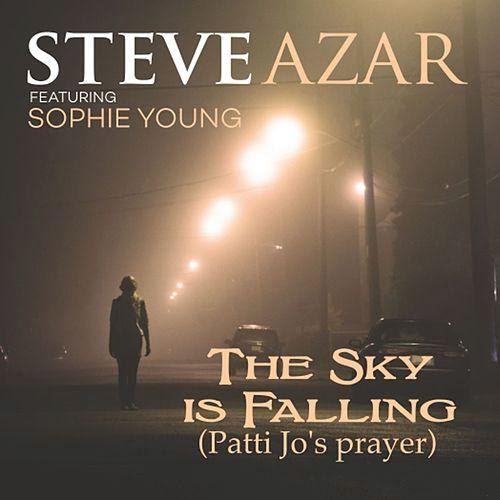 Purchase "The Sky is Falling" on iTunes and Amazon

Steve Azar’s latest single, “The Sky Is Falling” is an atypical release by the typically sunshine-y singer. The reason why it sounds so different is because it was written with a different purpose in mind. Instead of good time songs or interesting stories as Azar has previously released, this one has a specific cause; human trafficking awareness. Everyone thinks of human trafficking/sex trafficking as happening somewhere far away. An issue that is a horrible tragedy and “thank god we don’t have that here, thank god that would never happen in our town, hug your loved ones a little tighter tonight.” Is not an unusual sentiment or statement. While it is nice to think that stuff only happens in foreign countries and big cities, it’s untrue. According to an article that Azar’s website links to “Sex trafficking is a human tragedy and it’s happening in Maine. That’s a message Waynflete School senior Mike Rodway and South Portland Detective. Sgt. Steve Webster are trying to spread, with a big assist from a Nashville recording star.” Webster and Azar are friends, and thus forth Azar wrote this song with help from Rodway, Webster and their experiences interviewing those affected by this devastation. There is a video to further convey the story behind the song, created by Rodway and produced by Webster. One of the very pertinent points they hope to drive home is that the individuals affected by this is “prostitutes are victims more than they are criminals.” Though they do also stress to convey that hope, help and raised awareness is what they’re looking for. People looking to get back to their lives or start a new one. The video ends on a hopeful note.

They strive to inform what exactly human/sex trafficking is, how to raise awareness, where this is happening, and how to help. They strive to show who the victims are and what the specific problems are. The common associations with the people here might surprise you. Everyone has their own stereotype vision in their head, it is rarely shone a light on what someone has gone through or what the victims actually look like. The girl featured in this video doesn’t look like anything other than someone’s daughter or little sister. Your best friend next door perhaps. One who laughed with you in the cafeteria, sharing her an Oreo or some fries. In the video we transition from “victim” to "survivor” because “victim” though it is a title needed for a time, it’s not the only title nor is it a permanent one. Not only is it championing for a great cause and a needed reminder that this could happen anywhere, it also reminds you that you never know someone’s story or motivation for doing something. Their life choices aren’t always their own, your first glance isn’t always accurate. Try to understand instead of judge and villainize that which you haven’t been through yourself.

Steve Azar and Sophie Young sound great, the violin and guitar are beautiful, the video will greatly impact those who watch it, inspires you to get up off your ass and do something.

The video and the article can both be found here: http://www.pressherald.com/2015/01/09/waynflete-students-music-video-tackles-human-trafficking/