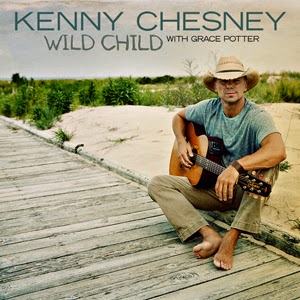 NASHVILLE, Tenn. (Feb. 3, 2015) - Kenny Chesney knew he wanted to take his music new places, explore different themes, but never lose sight of the people and places that shaped him. He spent 2014 focusing on his music – instead of staging one of his herculean stadium tours – and the result has already yielded the GRAMMY and triple Academy of Country Music nominated multiple week No. 1 “American Kids” and his 26th No. 1 “’Til It’s Gone,” as well as his 13th chart-topping Country Album The Big Revival.

With that ground broken, the songwriter/entertainer considers a woman’s place in country music today with the yearning Grace Potter duet “Wild Child.” Most added at country radio yesterday, Chesney thinks the song’s appeal is a very simple, but compelling reality.

“To me a girl who is so alive, so in the moment, so curious and hungry for life... there’s nothing like her,” Chesney says of the inspiration. “You can’t tie ’em down. So free... and so intense because of it. Nothing is more attractive. To me, that makes women really stand out. Whether they want to live in the mountains, become a doctor, play music in Hawaii or surf around the world, whatever their passion is, that’s what drives them – and man, it’s an amazing thing.”

Beyond shifting the way women are currently portrayed in country songs – never the motivation for the yearning ballad that again pairs the 8-time Entertainer of the Year with hippie rocker Grace Potter – “Wild Child” provided a creative pivot for Chesney as he was working on The Big Revival. It reflected his own quests, his own drive to see new things in the music.

“I was writing ‘Wild Child’ with Shane McAnally and Josh Osborne, and it just clicked,” Chesney explains. “Certain songs start a creative landslide, and that was it. The idea of writing about a girl who is so hungry to see the world, she’s scared she won’t taste it all before she’s done... who loves so hard, but can’t be tied down... that put everything into place.”

“When you think of my fans, they are passionate people... about life, music, their friends and how they dig in when it’s tough as much as how they have a good time. I knew during the last tour, they were hungry for more from this music. They wanted more of their life the way they live it, maybe some different things musically. And I spent a lot of time trying to do that.”

The subtle shift has earned some high praise. USA Today called The Big Revival “a coming-of-age tale full of life-changing memories,” while Esquire.com wrote it “feels completely organic” and New York’s Newsday proclaimed, “(Chesney) really builds his vision of America... a big-tent collection of future hits that celebrates regular folks who stand up for each other. In turn, even more folks will stand with Chesney after hearing it.” Notoriously tough Rolling Stone opined the album “continuously brings a sense of musical energy and emotional urgency... His strongest collection of songs since 2010’s career-defining Hemingway’s Whiskey,” The Miami Herald deemed it, “Chesney’s most infectious collection in a long time.”

With Chesney’s 2015 The Big Revival Tour set to kick-off with a double at Nashville’s Bridgestone Arena March 26-27, the man The Wall Street Journal called “The King of the Road” is getting ready to get back what he lives to do: connect with people through the music night after night. As “Wild Child” arrives at country radio, there’s plenty of new music to draw from – and plenty of songs to fuel a long hot summer.