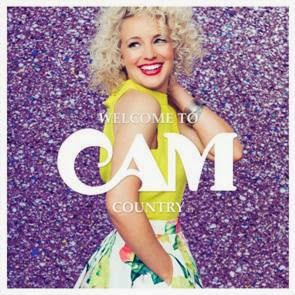 Nashville, TN – Arista Nashville singer/songwriter Cam delivered one of country radio’s hottest new singles last week with the irresistible energy of her song, “My Mistake,” and today marks the release of Welcome to Cam Country – EP, a four-song digital collection featuring “My Mistake.”

With each song co-written by Cam, the EP is available for sale at http://smarturl.it/welcometocamcountry, after premiering exclusively this month on Spotify, where the four songs collectively generated in excess of 4.9 million worldwide streams, including more than 1.7 million for “My Mistake” alone.  You can stream the EP at http://smarturl.it/spotifycamcountry.

On today’s release of her EP, Cam smiled as she thought about sharing this journey with her fans:  “It’s finally here!  I’m so proud to give everyone a glimpse into the world we have been working so hard to create.  I chose these four songs off the album, covering the widest range of emotions to give more people a chance to recognize themselves in the songs.  This is just the beginning of the adventure, and everyone is welcome.”

Further building on the excitement surrounding her new single and EP, Cam will make her debut performance on the Grand Ole Opry on May 29.  Cam’s appearance also coincides with the Opry’s special nine-month celebration of its 90th anniversary.

Amid a growing list of accolades from MusicRow, Roughstock, and other outlets, Cam’s “My Mistake” continues to turn heads, cited among “Tomorrow’s Hits” in Billboard and hailed as a Taste of Country “Critic’s Pick,” while Rare Country calls Cam “the hottest new female sensation in country music.”