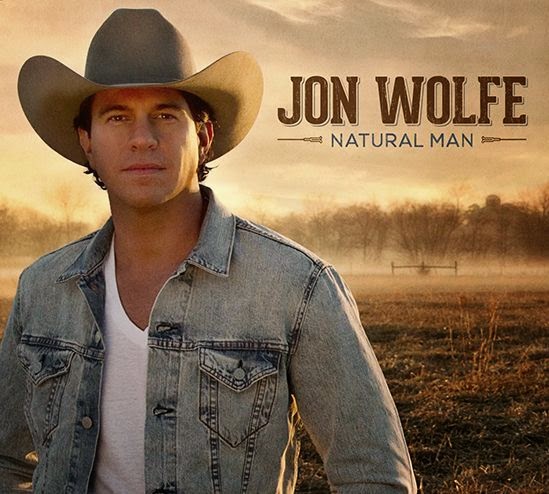 (Nashville, Tenn. – March 31, 2015) – Jon Wolfe’s new album, Natural Man, is now available for download on iTunes, Amazon and other major digital retailers. The much-anticipated album is the follow-up to Wolfe’s 2013 release, It All Happened in a Honky Tonk, Deluxe Edition.

Wolfe commented on how he decided on the name for his new album, saying, “Natural Man is the perfect title for this album because it really describes how I feel right now as a person and as an artist. I feel like I’m right where I need to be, doing exactly what I’m supposed to be doing. This album, these songs, this place and time… it all feels natural to me.”

Fans around the world are invited to watch a special, intimate world premier of Natural Man live from the Gibson Texas Showroom in Austin, Texas. The concert will air online via the StageIt.com Main Stage at 7:30 p.m. CDT tonight, Tuesday, March 31. Click here to register to watch the show.

Wolfe’s current single, cleverly titled “Smile on Mine,” is at Country radio, and is currently a Top 20 single on the Texas Music Chart and Texas Regional Radio Report. “Smile on Mine” is about the willingness to do whatever it takes to win the heart of a love interest.

Regarding the catchy track’s sound, Wolfe says it “represents this important bridge between traditional country and the more modern melodies we’re hearing on the radio these days.”

A seasoned performer, Wolfe has opened for some of Country’s biggest stars and has played more than 400 live shows over the past four years. He has a busy 2015 tour schedule on the horizon with his Natural Man Album Release Tour. The tour is scheduled to make 22 stops across Texas and into Oklahoma, with notable pit stops in Austin, Helotes and Fort Worth, Texas. For a full list of show dates for the Natural Man Album Release Tour, click here.

The best introduction to Jon Wolfe is the basic yet not so simple fact that he’s a Country singer and songwriter who’s Country to the core. With an array of influences including George Strait, Clint Black, Alan Jackson, Garth Brooks and Merle Haggard, the Oklahoma native turned Texan has been burning up the Texas Charts where he garnered six consecutive Top 10 singles (“Let A Country Boy Love You,” “That Girl In Texas,” “I Don’t Dance,” “It All Happened In A Honky Tonk,” “The Only Time You Call” and “What Are You Doin’ Right Now”).