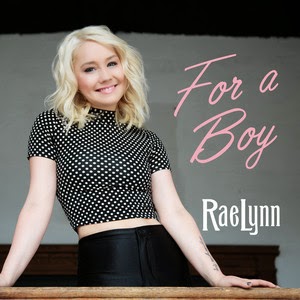 Republic Nashville recording artist RaeLynn has come a long way after being eliminated in the quarterfinals of season two on The Voice. Her fist single "God Made Girls" was certified Gold by the RIAA and has sold over 472,000 copies. She has now released her follow-up single "For A Boy" which will be hitting the radio March 23.

"For A Boy" is a powerful song about life and the love and some of the risks that are associated with letting your guard down and leaving yourself vulnerable when it comes to relationships. RaeLynn recently states that that the idea for the song came about after a dinner date with this guy that was super transparent and wore his heart on his sleeve rather than putting on the typical macho man act.
This song has the upbeat tempo that we have previously seen from her first single as well as her signature country sound. I'll be completely honest, the first time I ever heard RaeLynn I was not a fan at all, but the more I heard her songs the more she grew on me. She has definitely won me over.

Although "For A Boy" was not released on her five song EP titled "Me" you will be able to find it on her full album which is expected to be released in the fall. For more information on RaeLynn you can visit her website at www.raelynnofficial.net and follow her on Twitter at @RaelynnOfficial
Posted by LovinLyrics at 6:03 PM