20 ACTS AND 2 STAGES: DEEP SOUTH ENTERTAINMENT CELEBRATES 20 YEARS WITH STREET FESTIVAL ON MAY 16 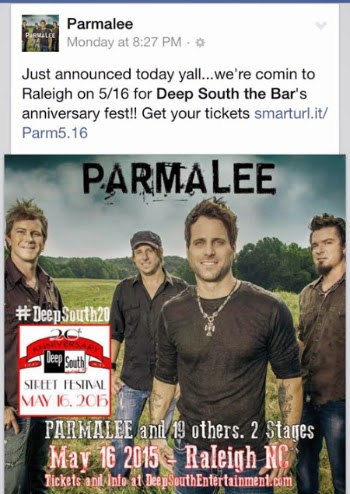 Following the announcement of Deep South Entertainment's 20th Anniversary celebration, the performers, fans, and friends alike have all voiced their excitement for the street festival on May 16th.

Deep South has been a staple of the Triangle music community since its formation in 1995.  The company has managed or business managed Grammy-winning and Billboard-charting artists like Bruce Hornsby, Little Feat, Parmalee, Marcy Playground, Stryper, Vienna Teng, Jason Michael Carroll, and many more.

Locally, Deep South produces concerts and events, and was instrumental in the introduction of more frequent outdoor live music in downtown Raleigh through their work with series such as Downtown Live, Raleigh Wide Open, and Oak City 7.  Additionally, the company owns and operates Deep South The Bar, a small live music venue across from the Red Hat Amphitheater.

Owner and President Dave Rose serves on the Raleigh Convention Center Commission and The Live Music Advisory Board through The Greater Raleigh Convention and Visitors Bureaus, and has been an advocate of local music since graduating from NC State in 1990.

Come join us Saturday May 16, from Noon to 11pm for Deep South's 20th Anniversary Street Festival presented by Bud Light. Located on the corner of South Dawson St. and West Cabarrus St., we'll be taking over downtown Raleigh for a music festival suited for anyone and everyone. The fun continues at the after-party inside Deep South the Bar with 90's cover band 120 Minutes from 11pm-2am.

Celebrating 20 years with 20 acts and 2 stages, #DeepSouth20 will feature performances by bands and solo artists that have been a part of our 20 year history.

Tickets are available now at DeepSouthEntertainment.com and you can SAVE $5 if you buy them now!

A portion of the proceeds will benefit Band Together NC and The LGBT Center of Raleigh.

Each of the 20 artists performing at the 20th Anniversary Street party has a rich history with Deep South. Below is a brief description of each.

Parmalee – Top 40 country music band that rose to the top of the charts with their #1 hit “Carolina” and only continue to “permanently make the top of the charts their home” –Got Country Online. Parmalee has also been featured in CMT’s Hot 20 Countdown and their singles “Close Your Eyes” and “Already Callin You Mine” have been circulating country radio nationwide.  Deep South and Parmalee have worked together for many years. The band is part of the family.

Marcy Playground – Marcy Playground is most famously known for their 1997 hit single “Sex and Candy”. The alternative rock band’s song hit big and the group will be coming together again for one time only on Deep South's stage to reprise the hit and others alike. Sex & Candy was featured on Deep Volume 1 in 1996, a compilation CD released by the fledgling Deep South Records. The success of that song moved the company into the national spotlight.

Blake Christiana of Yarn – Blake Christiana, Yarn’s frontman, harmoniously blends Americana, Rock, and Country for unforgettable performances through musical storytelling. Yarn has been making noise around the music scene for the past 7 years and has an impressive collection of albums to date.  Yarn has performed at a number of events produced by Deep South over the years, including Raleigh Downtown Live & Oak City 7.

Kasey Tyndall – Kasey Tyndall, a client of Deep South's country music division, Tennessee East Artist Management, is indeed North Carolina's next big country music star. In 2014, Tyndall won a regional contest to duet with superstar Keith Urban and the two wowed a crowd of over 18,000 at Walnut Creek. Industry leaders in Nashville have taken notice and she is currently writing and recording with some of the most respected writers and producers in country music.

Collapsis – Featured on Deep 2 and one of Deep South’s first management clients, the Chapel Hill rock act Collapsis achieved local and national fame after signing with Universal Records and recorded their major-label debut (Dirty Wake) in early 2000, which reached Top 30 on the Billboard Modern Rock charts.

Steve Howell & Caroline Mamoulides – Steve Howell from The Backsliders and Raleigh singer-songwriter Caroline Mamoulides join forces to make beautiful folk/Americana music together, and throw in some songs from their past as well. Owner Dave Rose cites The Backsliders as one of his earliest influences musically as he was coming of age in the industry.

I Was Totally Destroying It – IWTDI, managed by Deep South, have brought their own brand of indie power pop to stages all across the country for the past 8 years – touring with Motion City Soundtrack and Jukebox The Ghost, and sharing the stage with everyone from Joan Jett to Billy Bragg, Passion Pit to Modern English.

Erin Nenni – Another Tennessee East Artist Management client, Erin Nenni, is a singer/songwriter from a small town in North Carolina. A graduate from East Carolina University, Nenni’s career as a musician continues to bloom, having been heard on NPR's "The State of Things" and NBC's "My Carolina Today". She is releasing her debut country music EP this summer.

The Roman Spring – The latest project from Colourslide’s Alex Lawhon (winner of the John Lennon Songwriting Contest 2007 Song Of The Year award), The Roman Spring feature members of other NC luminaries such as Dillon Fence, Parklife, The Veldt, and Cravin Melon.  Visit Alex on Sunday night’s at Deep South the Bar.

Katie Garfield – Actress and singer/songwriter from Cary, NC released her first single “Put Me Back On My Throne” early February where it reigns at the top of the local charts on ReverbNation. Garfield resides in Los Angeles and is a client of the business management division of Deep South.

Season & Snare – Deep South the Bar’s 2014 Open Mic Winners Season & Snare features band members and co-creators Casey Austin Allen and Autumn Rose Brand. The duo has made waves in the Indie/Pop community and continues to deliver impressive harmonies through their music and undeniable talent. Set to release their first single soon, Season & Snare looks ahead to a bright future in music.

Zak Domogalla – As part of the Deep South the Bar family, Zak Domogalla never fails in delivering heartfelt Alternative and Acoustic Rock performances. His music embodies his life experiences and he utilizes lyricism and melody to perfect the art of storytelling.

Ryan Mullaney – Acoustic songstress, Ryan Mullaney, is the host for Deep South The Bar’s Tuesday Open Mic, which for 5 years running has been nominated Best In The Triangle by the readers of the Independent Weekly.

120 Minutes – 120 Minutes play everything from Spice Girls to Nirvana, Blackstreet to Gin Blossoms, Alanis Morisette to Blind Melon – anything to make you say “The 90s are back!”  120 Minutes is comprised of several Deep South staff members:  John Booker, Curtis Armstead, Griffin Wade, and Aslan Freeman.

Adam Pitts - Incredible one-man-band Adam Pitts has been performing at Deep South produced events longer than most, and winning over the crowds every time. Pitts is one of the hardest working musicians in the Triangle area, and has taken his talents abroad as well. Pitts traveled to the Bahamas to perform in the Raleigh Rocks The Bahamas events in 2007 and 2008. Adam Pitts will join 120 Minutes on stage during the after party at Deep South the Bar to belt out some 90s hits and get the whole place dancing, as he always does. 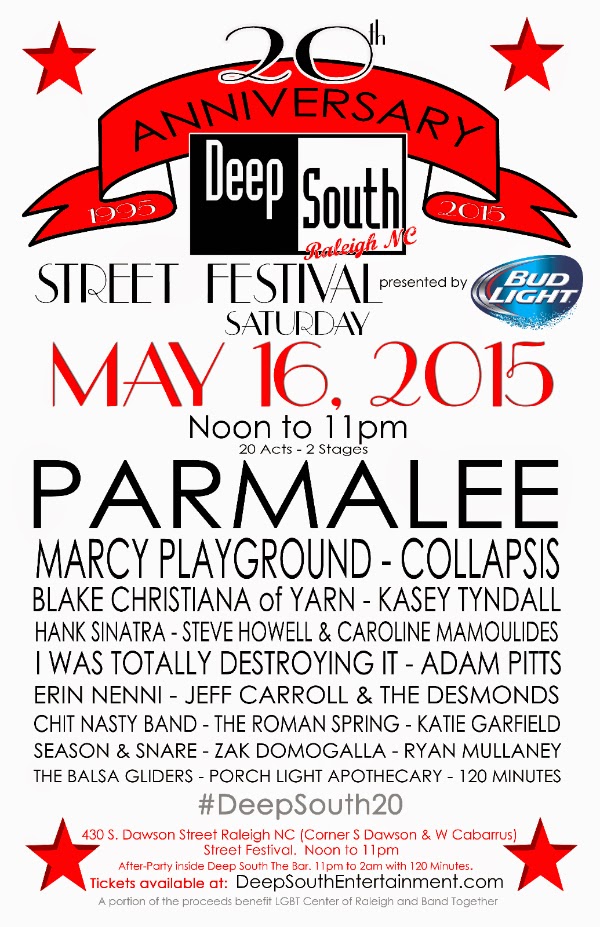 Posted by LovinLyrics at 5:24 PM