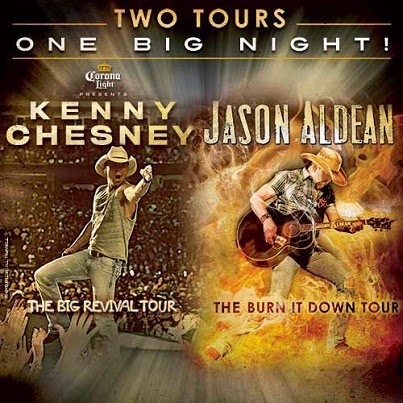 NASHVILLE, Tenn. (Monday, April 27, 2015) – When Kenny Chesney kicked off his The Big Revival 2015 Tour with two sold-out nights at Nashville’s Bridgestone Arena, he knew it was just the tip of the iceberg. The man who’s the only country artist in Billboard’s Top 10 Touring Acts of the Last 25 Years – headlining for only 12 – is the most alive when he’s taking his always high-energy shows to the largest venues.

Saturday, May 2, Chesney merges THE BIG REVIVAL TOUR with Jason Aldean’s wildly successful BURN IT DOWN TOUR for the first of a dozen co-headlining shows. The pair will open San Francisco’s brand new Levi’s Stadium – bringing high impact country to the Bay area for one definitive night of music.

“There is nothing I love more than playing stadiums,” Chesney says. “The energy and the size of the stage lets me get close to so many more people – and that is a feeling unlike any other. To be able to join up with Jason for these shows this summer, I think it’s the kind of night people won’t forget.”

The man The Wall Street Journal deemed “The King of the Road” has a special place in his heart for the City By The Bay. As he says, “San Francisco has always been an amazing place for us. I’ve had Steve Miller and Sammy Hagar join me onstage there... The fans come early, they stay late – and they always send us into multiple encores. If this is how we’re kicking off the year in stadiums, this is going to be a pretty strong bar-setter.”

Chesney, a 4-time Country Music Association and 4-time consecutive Academy of Country Music Entertainer of the Year, has had 26 #1s, 13 #1 Albums and sold in excess of 30 albums. Heralded as “The People’s Superstar” by The Los Angeles Times, his summer concerts are legend:  indeed, many people plan their vacations around his tour schedule.

Jason Aldean, whose Old Boots, New Dirt became his second #1 Billboard Top 200 Album chart debut, is known for high intensity shows, his sense of true grit and songs that capture the way his fans genuinely live. Country's most downloaded male artist and three-time Academy of Country Music Male Vocalist of the Year has extended his wildly successful BURN IT DOWN TOUR into 2015, including the dozen stadium shows with Chesney.

This pairing extends beyond the two headliners. Joining them in San Francisco will be Jake Owen, known for his laid back, but invested take on country – including the #1 hits “Beachin’,” “Barefoot Blue Jean Night” and “What I Ain’t Got.” Also on the bill is Luke Bryan/Thomas Rhett/Florida Georgia Line hit songwriter/emerging artist Cole Swindell, whose hit #1 on his own “Chillin’ It” and “Hope You Get Lonely Tonight.”