SINGLE REVIEW: "WHY YOU GOTTA BE THAT WAY" - JOSH GOODLETT

SINGLE: "Why You Gotta Be That Way"
ARTIST: Josh Goodlett
REVIEWER: Alyse Smith
Follow Alyse on Twitter at @ASmith1300 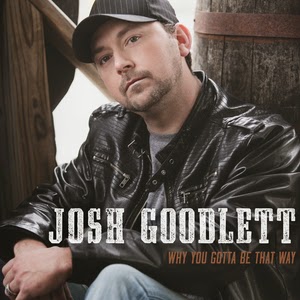 Newcomer Josh Goodlett has released his debut single “Why You Gotta Be That Way”, a mellow song chastising a guy for being out and about instead of with his girl.  The guy in question is mistreating his girlfriend, every time she tries to pull him close, he pulls away.  He thinks she deserves to be treated better than by some guy who can’t afford to give her the time of day.  He’s friends with the girl in question and hasn’t said anything to either of them, but just sits at the bar thinking “why you gotta be that way?”  As it turns out, he’s secretly in love with the girl, thinking things like “why does she love you,” “why isn’t it me?” and “if she walked out the door today it’d be your loss.”  The Kentucky native opines that she’ll find happiness someday with someone else and you’ll realize what you’ve lost.  Though a mellow sound, the message is a little different than what is typically heard on today’s radio.  By no means a happy song, we can only hope the sequel he releases ends up with him finding his confidence and being honest with the girl that he’s pining for.

Kentucky through and through, Josh Goodlett was born in raised in rural Taylorsville where he resided until he made the move to the much bigger city of Louisville, where he currently lives.  Josh is very active on social media, always taking time to reach out to fans and friends alike, so be sure to listen to the song and tell him what you think!

Posted by LovinLyrics at 5:26 PM