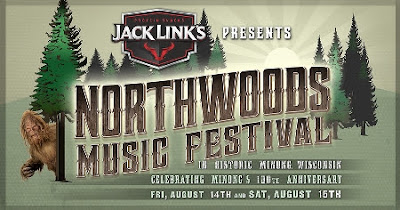 The inaugural NORTHWOODS MUSIC FESTIVAL will bring some of the world's greatest country artists to perform at the scenic outdoor music festival and carnival on the grounds of historic downtown Minong, Wisconsin surrounded by the tall trees of the North Woods and its picturesque lakes. Pre-sale festival 4-pack tickets are on sale now and available for $30.00 and $120.00 with some special incentives for those who buy early (Here). General on-sale will begin June 12. For tickets and information about VIP packages, visit www.nwmfest.com.

On Saturday, August 15, NORTHWOODS MUSIC FESTIVAL will debut with a full day and night of music. The award-winning, multi-platinum country music singer TRACE ADKINS will headline with performances from RODNEY ATKINS, JANA KRAMER, DAVID LEE MURPHY, BUCKEY COVINGTON, MAGGIE ROSE and a very special guest to be announced on June 20. Gates to the main festival will open Friday, August 14--Friday admission is free with the purchase of a Saturday ticket--and will kick off the weekend's festivities with regional tribute artists POP ROCKS, MISH MASH, THE WHITE KEYS and more.

The NORTHWOODS MUSIC FESTIVAL will take over downtown Minong, WI, a historic town which is celebrating its 100 Year Anniversary this year. Attendees will enjoy a world-class festival atmosphere with Country Music's Hottest Performers gracing the Outdoor stage, thrilling carnival rides, a classic car show, games for the whole family, local food and ice cold beer will be on tap, all in a walk-able atmosphere nestled in the scenic North Woods area. The main festival site will be located at (660 Hokah St. Minong, WI 54859) and extend throughout downtown Minong (West 5th St.) as the area is transformed into an outdoor amusement area with a capacity of 10,000 in the main festival site alone.

"We're fortunate to have a great lineup and bring this caliber of talent and production to Northern Wisconsin," states the Northwoods Music Festival Development Team. "We're thrilled to bring world class entertainment to such an intimate environment. We invite the local community as well as our neighbors far and wide, to come celebrate Minong's 100 year history and start a new tradition."