ERIC CHURCH BREAKS INTO OWN HALL OF FAME INDUCTION 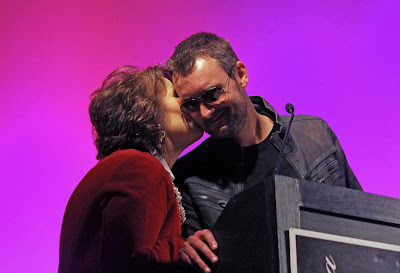 Eric and his mother Rita Church on stage at the North Carolina Hall of Fame
ceremony on Oct. 15, 2015 at Gem Theater
Credit: Daniel Coston

Kannapolis, N.C. (Oct. 16, 2015) - Long before receiving a CMA Entertainer of the Year nomination and shattering venue attendance records on his The Outsiders World Tour, Eric Church beguiled audiences in gritty dive bars with solo renditions of his then lesser-known hits amidst his show while giving his band a break from grueling three hour a night-plus set. Last night, Church found himself back in a small theater in North Carolina in a familiar yet slightly different situation after breaking in through a second story balcony, but still standing on stage with his trademark aviators and an electric guitar in hand wondering what in the hell he should play.

It all started innocently enough...

After wrapping earlier than expected at a private event in his home state, Church found himself only an hour and a half away from the North Carolina Music Hall of Fame ceremony where his mother, Rita Church, accompanied by his sister Kendra, were attending the induction to accept the invitation on his behalf. Realizing he had no time to spare, Eric borrowed the keys to his father Ken's vehicle and--with his wife Katherine and assistant Marshall Alexander in tow--they rushed in an attempt to make it to the Gem Theater in time for the dedication. While Alexander drove, Eric was busy texting his sister--unbeknownst to her or the hundreds in attendance--to see if he could arrive in time as he now had set his mind on attending and surprising the crowd.

When only a few miles away, Eric learned his mother had stepped on stage to read her remarks of gratitude for the honor, but instead of chalking it up to a missed opportunity, Alexander and the Church's proceeded on, whipping the SUV into an alley where they hoped a back entrance existed to the theater. There, the trio spotted cords snaking into a second level balcony entrance, and without hesitation or clarification, Alexander scaled the wall to gauge the scene, bursting through backstage balcony barn doors. Startling a group of musicians prepared to take the stage next to close out the ceremony, Alexander confirmed that indeed Rita Church was currently on stage speaking to the black tie clad crowd. Always resourceful, Alexander grabbed a nearby ladder and threw it over the edge, urging the Church's to hurriedly ascend in order to make it in time for Rita's closing remarks.

Rita continued, "...and on behalf of our family, my son, the fans..." then her speech was interrupted by an eruption of screams and applause as Eric stepped on stage to echo her sentiments and thank the crowd.

But before he could leave, the crowd demanded their Hall of Fame inductee play something. Unprepared having barely made it for the ceremony, the North Carolinian borrowed a beat up electric guitar, and said, "well, let's see what I can play in whatever key this is in..." And with that, Church played a new solo rendition of "Carolina" before exiting down the ladder, getting back into the car, and heading back home. 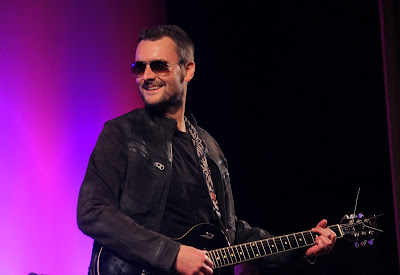 Eric Church takes the stage at the North Carolina Hall of Fame ceremony
on Oct. 15, 2015 at Gem Theater
Credit: Daniel Coston
Posted by LovinLyrics at 1:04 PM