THE FINE LINE BETWEEN SIN AND SALVATION: MEET BRIAN BONDS 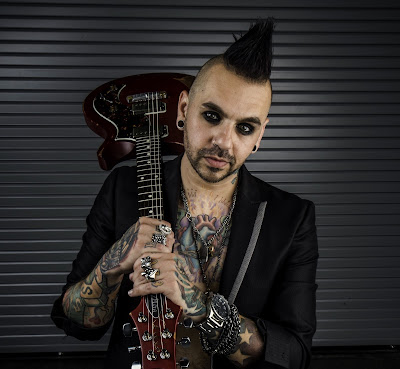 When you first see Brian Bonds, based on the mohawk, guy liner, piercings, hair metal band tshirts and an abundance of tattoos, it's sadly very easy to form a judgement on who you think he is and what you think he's about. I can tell you almost immediately that your judgement would be dead wrong. When I first met the former guitar player for Florida Georgia Line during an interview in 2010, I admit without hesitation that I had those same judgements. You immediately think he runs with a rough crowd, gets into the wrong situations and is a reckless soul. You're right, he has run with a rough crowd, he has gotten into the wrong situations (haven't we all at one time or another?) but he is far from a reckless soul and if one takes the time to sit down with him and have one conversation, I can promise you that your opinion will change. There's something about him that can't help but draw you in, to make you see beyond the obvious. Does he cuss? Yep. Does he drink? Yep. Does he really care what people think about him? Yep, more than you would think. Fans LOVE him. He's kind hearted, soft spoken, quick witted and willing to share his love of music with anyone who wants to listen. He's telling his stories in a way that's hard to come by these days, with raw emotion and personal experience. He's lived on both ends of the musician's fence - traveling the world as part of country's most visible and successful bands, Florida Georgia Line. He's the one you can always find mingling with fans in the parking lot or wandering meet and greet lines saying hello, not just sitting in the bus until showtime. He loves people and knows the importance of getting to know them and to let them get to know him. He's seen it all, some he probably wishes he hadn't seen. He's lived the musician's tales of excess, fame and fortune and he's seen the ups and he's experienced the downs. He's also lived on the good side - he has a beautiful family who he loves very much. Watching him play with his young son, Hendrix, and how much this kid adores him is a vivid reminder that what you see truly is just on the outside, the really good in Brian is what you don't see upon first glance, who he is on the inside.

He decided to leave the "good life" to truly focus on the GOOD life - his family, to mentor young musicians and help them find their way in the business and to develop his own music and his own unique way of bridging the various styles he grew up on, rock, blues and country, into a style all his own. His vision is to show both sides of the coin and tell the stories of what happens between rock bottom and the brass ring, not only as how he's lived them but as we've all lived them at one time or another in our lives, and how we survive the struggle between the two. It was the right time to step out from the shadows of the road and stand in his own spotlight. His sound is so unlike anything else out there and undeniably "love it or hate it", but whether you make the decision to love it or hate it, it's always going to be 100% Brian Bonds and there is no selling out and no blending in with the rest. He's not shooting for musical perfection, he wants the imperfections to be noticed, the emotion to be heard and the music to simply be relateable to everyone that listens. The only way to really describe his music is a musical conglomerate of the bad boy, outlaw side of Waylon, the fightin' side of Merle, the sensitive side of Willie and the dark side of Johnny mixed with the heavy rock influence of Def Leppard, Pantera, White Snake, Van Halen and other heavier bands all while keeping the basic ingredients of country like banjos, steel guitar, Dobro, storytelling, honesty and sincerity. As a multi-genre fan, I love it and this is only song one.

His first single, "Wrong Side of Tennessee" was recently released and has been getting great reviews from fans, writers and other industry insiders. It's about the "wrong side" and about temptation. The single is available for download on iTunes now. He's working on follow up singles and I had the pleasure of hearing them before they've been mixed and released and they're fantastic. I'm not really a "genre discriminator" because I love most styles of music (ok, I don't care for rap so maybe I do discriminate a little there) and personally I love that there are so many styles out there right now and this is a marriage of genres that actually work and don't sound like a screwed up mess that happened to slip out of the studio. There's plenty of "country rock" out there but I think this falls under the "rock country" label with a mad dash of today's brand of outlaw (if you're really going to slap a label on it). It's definitely heavier on the rock side and it will rock your ass off. It's like that first slow sip of whiskey, it kicks you hard right out of the bottle but once it hits you, the burn is nice and easy but will leave you wanting another sip.

Posted by LovinLyrics at 7:02 PM