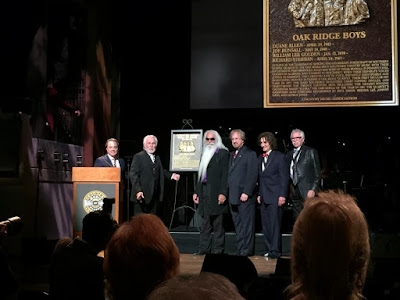 Joe Bonsall, Duane Allen, Richard Sterban and William Lee Golden have seen and been through a lot on their 41 year journey to the top of the country music mountain. They've seen most of America through a bus window, hugged and have shaken hands from millions of fans, graced many of the world's biggest stages, and have spent more nights away from home and their families than any of us could dare imagine. They've had their downs, missing birthdays, losing loved ones and close industry friends, and losing William Lee Golden for a few years who was replaced by Steve Sanders only to have him pass away a short time after. They've had their ups, winning award after award, hit song after hit song and the return of William Lee Golden. They've seen artist after artist invited to join the Grand Ole Opry, finally getting their long and admitted overdue invitation in 2011. The one invitation that seemed to continuous evade them, even after 40+ years of sell out shows, multiple awards and #1 and top 40 hits, was the one that every artist considers the top of the mountain, the pinnacle of achievement, the much respected and revered membership in the Country Music Hall of Fame. Well this year, they finally reached that summit and yesterday, 10/25/15, they were officially inducted into the Hall of Fame in a private, invitation only ceremony. They've always been legends, but now their names will forever adorn the hallowed rotunda in downtown Music City, their faces among such historical country music figures such as Patsy Cline, Johnny Cash, Merle Haggard, Waylon Jennings, and Marty Robbins. No more praying that their names would be the next announced, no more crossing fingers and saying "maybe next year", this is their year and fans everywhere celebrated with them through social media posts. What an amazing time to be an ORB fan, to see history made and to know that their years of hard work, faith, loyalty and respect for the genre have finally seen the recognition they've long deserved.

Congratulations my friends, you ARE at the summit of that mountain! Enjoy the view, looking over the beauty and meaning of everything you've gone through to get here and to experience this celebration together, as friends and as family. We love you!

Posted by LovinLyrics at 6:31 PM