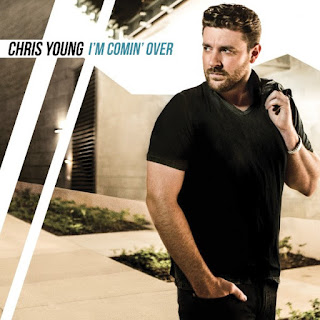 More than a year in the making, Chris Young’s highly anticipated fifth studio album, I’m Comin’ Over, is now available for purchase and digital download. In support of the new record, Chris will be performing the album’s lead single and title track live on NBC’s Today Show on Monday, November 16th in the 8:30am ET segment and will also perform during the 10am ET hour with Kathie Lee & Hoda. Adding to the excitement of release date, fans can also pick up a copy of Nash Country Weekly, as Chris is featured as this week’s in depth cover story.

Released by RCA Nashville, I’m Comin’ Over features eleven tracks – nine of which were co-written by Young – including his Gold certified single “I’m Comin’ Over,” which is currently #3 and climbing up the Billboard Country Airplay chart. Also included on the disc is “Sober Saturday Night,” a collaboration with Vince Gill, and “Think Of You,” a duet with Cassadee Pope, the special guest on Young’s 2016 tour. The album marks the first time that Young has co-produced, working alongside Corey Crowder.

I’m Comin’ Over is already receiving rave reviews from critics across the country:

“One of his era's finest traditionalists, and an outstanding balladeer…” – Associated Press

"Chris Young has defied the odds to become one of country’s most consistent, relatable voices…I’m Comin’ Over puts Chris in full command of his most mature set of songs yet—right where he should be.” – NASH Country Weekly

"Chris Young’s storytelling stands tall on his fifth studio album…some of his most revealing and personal songs to date…I’m Comin’ Over is an album that loves, bleeds and begs for another chance.” – Taste of Country

Fans can also now purchase tickets for Young’s recently announced 2016 “I’m Comin’ Over” Tour, presented by AEG Live, at ChrisYoungCountry.com and aeglive.com. A limited number of exclusive VIP Packages are available, which can include premium tickets, access to a Chris Young preshow acoustic event, limited-edition merchandise and much more. Cassadee Pope will join as a special guest, opening thirteen shows beginning January 21.