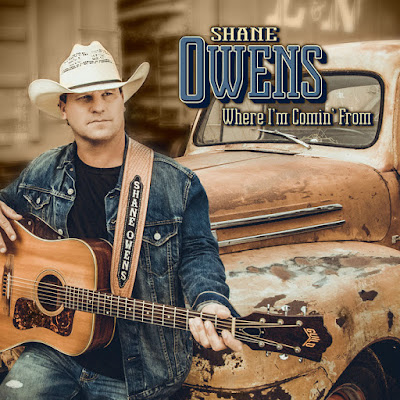 "Shane Owens brings it all: vocals, writing, performance, and passion. He has paid his dues, remained committed to traditional country and brings you a song with heart and a story. Songs that will get you through the tough times and enjoy the happy times, and lyrics that will remind you of the threads in life that make you the fabric you are today. He will bless you with his talent and his kindness. To Shane, I gladly pass the baton..." - Randy Travis

Country music traditionalist, Shane Owens, returns to the rural roots of real Country music with his new single, "Where I'm Comin' From," on AmeriMonte Records. With a heartfelt lyric and hook-filled melody, Owens delivers a message with his burnished baritone vocal that cuts through the hometown fabric of blue collar America. The track is available on CDX Vol. 623, the CDX Download center and at Play MPE.

As demonstrated by the events of the recent CMA Awards, today's music fans are hungry for real artists who speak to the struggles and triumphs of the common man and the pendulum is swinging back toward more traditional sounds. Owens, by no means a newcomer to the scene, is well-positioned to become one of the standard bearers leading the charge for the triumphant return the traditional Country music genre.

Hailing from Samson, AL, Owens has established an impressive following across the Southeast and opened shows for Kenny Chesney, Hank Williams, Jr. and many others. His natural, traditional country sound and easy-going Southern mannerisms, has repeatedly attracted Nashville label attention and led to two different record deals. Unfortunately, unexpected label closures left much of Owens' music unreleased, testing his resolve and will to continue. The staunch country traditionalist has survived career setbacks that would have defeated most performers. Instead, he has recorded a group of songs that will certainly be the breakthrough that he has worked hard to achieve.
Owens offers an upbeat perspective on his career: "I'm very excited about the new single and the message that it delivers!" states Owens enthusiastically. "I think not only Country music fans can relate to it, but listeners from other genres will as well. Simply put, it's a great song and I can't wait for the world to hear it!"


For more information about Shane Owens, visit his Official Website at www.ShaneOwensCountry.com
Posted by LovinLyrics at 4:05 PM