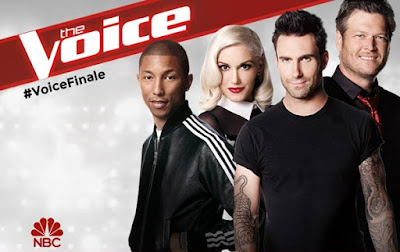 NBC's hit vocal competition, "The Voice", wrapped up an amazing ninth season last night with one of the closest races ever for the title. The four final positions, whittled down from thousands of entries, went to #TeamBlake's Barrett Baber and Emily Ann Roberts, #TeamGwen's Jefferey Austin, and #TeamAdam's Jordan Smith.

With America's final votes cast the night before, the finalists returned to the stage with former contestants and to sing duets with their "dream duet partners" as well as duets with their team coaches. What a night for some amazing music!

The night kicked off with an all inclusive contestant rendition of "Lean on Me". Following the performance, each finalist brought back a previous contestant of their choice for a duet. Barrrett Baber chose country favorite Zach Seabaugh for a rousing rendition of the Randy Travis classic, "Forever and Ever, Amen", bringing the crowd to their feet and having millions at home singing along.


Up next was Jeffery Austin with former team member Madi Davis for their collaboration of a song by the late Amy Winehouse, "Tears Dry on Their Own". In true Jordan form, Smith went big and kicked it into full gear by bringing back several contestants to raise the roof with the Journey classic, "Any Way You Want It". Emily Ann Roberts followed Jordan's lead by bringing back a brigade of her own to rock the stage with Rascal Flatts' anthem, "Summer Nights". Following the contestant performances, Coldplay took the stage and performed their song, "Adventure of a Lifetime", followed by another group of former contests who boarded the "Love Train".

Country Dream Duet #1 - Emily Ann Roberts and country bluegrass legend, Ricky Skaggs, did some big time pickin' and it was us that was doing the grinnin' as they brought the crowd to their feet with a rousing, energetic performance of  Skaggs' "Country Boy". What a showing! Bluegrass had a rebirth last night and I'm sure a birth of many new fans.


Following the country collaboration of Roberts and Skaggs, Jeffery Austin connected with his dream partner, Tori Kelly, on her single,“Hollow” and the crowd loved it.


Country Dream Duet #2: Barrett Baber and one of country's biggest voices and most powerful presences, Wynonna, performed her smash hit, "No One Else on Earth" and it was a power vocal on both parts without a doubt.


The evening wrapped up with a duet between Pharrell and hip hop queen Missy Elliott, a performance of "Break Up in a Small Town" by Sam Hunt, a song by The Weeknd, and a finale performance by Justin Beiber.

And the winner was ... and well deserved ... JORDAN SMITH!
Congratulations to all finalists, you were the cream of the crop and we all know that cream always rises to the top!
Posted by LovinLyrics at 2:46 PM