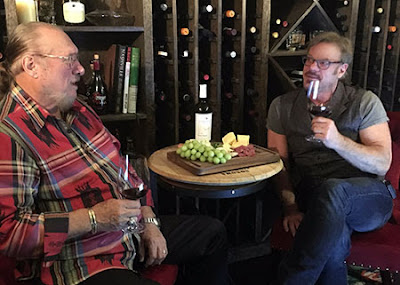 NASHVILLE, Tenn. (December 16, 2015) – Award-winning singer/songwriter Phil Vassar is opening the doors to his personal cellar to showcase wine and spirits, share unforgettable stories and collaborate with special guests, including Sarah Darling and Steve Cropper, in his new video series, “Songs from the Cellar,” which will feature intimate interviews and comedic banter unlike any other show on air or online.

Episodes will feature live performances and conversations when it debuts in December 22 on PhilVassar.com as well as SongsFromTheCellar.com.

Songstress Sarah Darling and iconic songwriter/guitarist Steve Cropper, known for co-penning “(Sittin’ On) The Dock of the Bay,” join Vassar in upcoming episodes.

“This is a first for us, and it’ll be a real treat for our fans. We always wanted to bring them into our home and witness some of the magic that can happen when we play with icons like Steve Cropper and newcomers who are as talented as Sarah Darling. And we found “Songs from the Cellar” was the perfect opportunity to sip some vino, sing our hearts out and share some laughs,” Vassar said.

Future episodes will incorporate artists, songwriters and wine connoisseurs as featured “Songs from the Cellar” guests. Each episode will bring of wine, food pairings, world travel and more to the table. The show is not complete without the pairing of storytelling as well as wine and food pairings.

Vassar continues his #noPHILter tour including a sold-out show at Franklin Theatre Dec. 18 in Franklin, Tenn., which will also be LIVE streamed through Digital Rodeo TV’s free app, available here.

“This is all about transcending the venue and bringing our show straight to fans. Although we play more than 135 shows a year, we aren’t able to reach all our fans, and many aren’t able to experience our Christmas shows. Live streaming allows us reach them wherever they are - as well as experience our favorite holiday songs,” Vassar said.

Fans can expect to hear original and Christmas classics, new material from his forthcoming album as well as well as his reign of hits, including "Carlene," "Just Another Day in Paradise," "Six-Pack Summer," "That's When I Love You" and many more.

Vassar will also be joined by rising singer/songwriter Sarah Darling during the Dec. 18 show.

As with all #noPHILter concerts, Vassar will tap into the crowd for social media requests during the show.

“During our last live streamed concert, we were getting requests from Sweden, Canada, Brazil, and all over the world. We can’t wait to see where the tweets come from this Friday, said Vassar.”