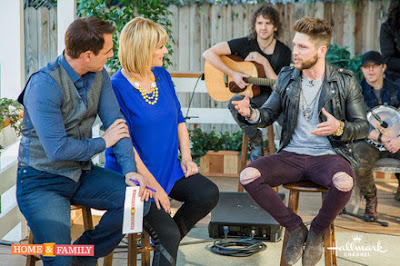 Chris Lane performed fan-favorite song “Her Own Kind of Beautiful” on Hallmark Channel’s “Home & Family” lifestyle show today (1/26). He also joined Sarah Michelle Gellar in the kitchen to taste test one of her Valentine’s Day recipes and got in some giant bowling action. Talking with hosts Mark Steines and Cristina Ferrare, Lane shared details about life on the road with his twin brother Cory, who plays drums in his band and dished on the most romantic thing he has ever done for a girl. “Her Own Kind of Beautiful” is off Lane’s newly released EP FIX, which also features Top 30-and-climbing single “Fix.”


Breaking records with his lead single “Fix,” Lane accumulated the most first week single adds from a debut male artist in Country Aircheck history. Lane landed at No. 1 on Billboard’s Twitter Real-Time Emerging Artist chart, racking up shout-outs from celebrities Brett Eldredge, Florida Georgia Line, Lucy Hale, Dustin Lynch, Cole Swindell, and more, making the song one of the most shared tracks on Twitter in the U.S. from an up-and-coming artist that day.

Celebrated by ROLLING STONE as one of the “10 New Country Artists You Need To Know,” Lane kicks off 2016 on YOUNG HOLLYWOOD's “Artist To Watch” list, HELLO! Magazine's “People You Will Be Talking About,” GLAMOUR’s “Music We Love” and is included in CMT’s 2016 LISTEN UP campaign. The hot newcomer started his career selling out club shows in his hometown of Kernersville, NC, and launched onto the Country music scene opening for Brett Eldredge, Thomas Rhett, and Chase Rice, eventually touring with heavy-hitters Florida Georgia Line, Nelly, Jerrod Niemann, Lee Brice and more. Currently, Lane is touring nationwide and opening Dustin Lynch’s first-ever headlining HELL OF A NIGHT Tour, with sold out shows coming up in San Diego (1/28) and Anaheim (1/29, 1/30, 1/31). For more information, visit www.iamchrislane.com.

FIX EP is available on iTunes now.
Posted by LovinLyrics at 12:08 PM