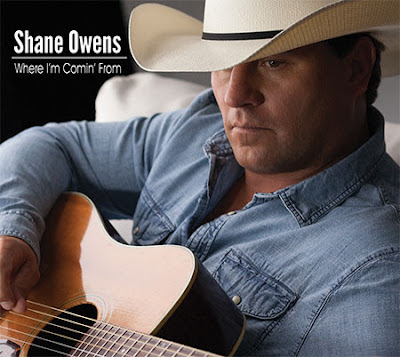 Critics and fans alike have been raving about Shane Owens' highly anticipated debut album, Where I’m Comin’ From, citing the traditional-based artist as one – who like George Jones sang about in his classic song – just might be able to fill the shoes of legends such as “The Possum” and Merle Haggard. The Amerimonte Records recording artist received a ringing endorsement along those lines from Country Music Hall of Fame inductee Randy Travis – who lent his production talents to the album.

“Shane’s song, “Country Never Goes Out of Style,” is a simple and perfect description of what country living and country music is all about.” said Travis in reference to Shane’s current single, which is going for adds at radio stations across the country. “In listening to it, I can’t help but reminisce about the best days of my youth and life in simpler times—when technology was a phone with a cord and a party line, transportation was a bicycle, a horse, or a hand-me-down car with manual windows, and taking the initiative to help someone in need was your pleasure and just the way it was. Though much has changed, I think it’s important to keep a focus on our roots—it is a way of life that should never go out of style. Shane has successfully merged yesterday, and today, to remind us that country will always be in style!”

James Stroud, who produced the album, has blazed trails for country superstars such as Toby Keith, Tim McGraw, Clint Black, Aaron Lewis, Chris Young and many more during his career. Among Stroud’s credits include having produced over 130 No. 1 singles. The album Where I’m Comin From will be available for pre-order on iTunes and Amazon beginning on October 21 and available for purchase on December 9 in select retailers nationwide through Memphis, TN based distributor, Select-O-Hits. Click here to download Shane’s current single, “Country Never Goes Out Of Style.”

“When I first heard Shane, I knew there was something special there,” said his publicist Kirt Webster. “His vocal stylings bring to mind the music that I – and so many others grew up on. His energy on stage is also a huge plus, but the most important element of the Shane Owens story is that in just being around him, you can tell how much he enjoys what he is doing. He is going to be a force to be reckoned with.”

Where I'm Comin' From Track Listing

Where I’m Comin’ From
All The Beer In Alabama
Country Boy Can
Blame It On A Woman
Alcohol Of Fame
Country Never Goes Out Of Style
God and The Ground She Walked On
Chicken Truck feat. John Anderson
Nashville You Ain’t Hollywood
19
Where I’m Comin’ From (Extended)

“Wow. What a singer. Somewhere, Keith Whitley is smiling, because this guy has the phrasing of a great, timeless country stylist.”
-Country Music Historian, Robert K. Oermann