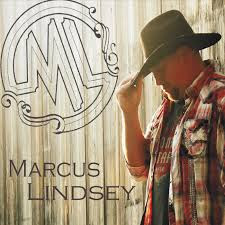 Tonight being the airing of the 50th Anniversary of the CMA Awards, it seemed like the perfect time for me to tell as many country music fans as I can about the new self-titled album from a true "urban cowboy", Marcus Lindsey. The awards tonight is promoted as an homage to a genre of honest and simple music by artists that work hard to leave a positive impression and that and that's exactly what you get from Marcus and although I've had the CD for awhile, this is the exact reason I chose to wait until today to publish a review.

His first single released from the album, "One Less Fool In Amarillo" is a hint for this generation's singers to re-evaluate what this genre is about. It's not just about cut off shorts, white tank tops and making out on the hood of a truck while drunk on Fireball. It's about love, about loss, about holding on and about letting go. It's about how we handle the time between finding ourselves staring at the bottom of an empty bottle of Jack Daniels and seeing the light when we finally realize that enough is enough. This song is the start of a new beginning, something every one of us can relate to in one way or another. That's what this genre needs, emotional relativity.

With upbeat tracks and heartbreaking ballads, Marcus Lindsey shows off his range and his ability to draw in even the most discerning country music fan. He made sure there was something for everyone and he did it well. This album brought back so many memories of nights at the Longbranch watching artists like Clint Black and Garth Brooks before they became household names and dancing around a sawdust floor to a jukebox of country classics.

Marcus Lindsey is a vocal reminder that the days of George Strait and Keith Whitley aren't over, they've just been waiting until the right time to come around again.

You can connect with Marcus online at www.marcuslindsey.net or on Twitter at @mlindseyband and Facebook at www.facebook.com/marcuslindseyband.
Posted by LovinLyrics at 1:42 AM