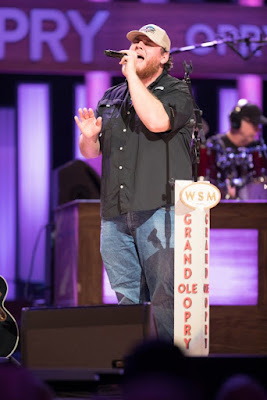 River House / Columbia Nashville recording artist Luke Combs made his Grand Ole Opry debut Saturday, October 29th, sharing the stage with legends Bill Anderson, Connie Smith, Jeannie Seely and more. The “Hurricane” singer was introduced by legendary cowboy crooners Riders In the Sky and received an enthusiastic welcome from the audience as he entered the iconic Opry circle and wowed with a soulful rendition of “Tennessee Whiskey” and a memorable performance of his debut single.

Combs has taken the country music scene by storm with his current single, “Hurricane,” he’s been named as one to watch by Music Row, Nash Country Daily, Sounds Like Nashville, Wide Open Country, Sirius XM’s The Highway and was recently one of Rolling Stone’s “Top New Country Artists You Need To Know.” “Hurricane” is the first single from his forthcoming full-length album, This One’s For You.