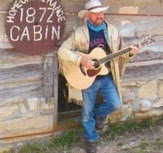 Lone Chimney Films in association with Sperra Studios will present their newest film Home on the Range on Monday, January 30 in celebration of Kansas Day at 2 pm at the Kansas State Capitol for Kansas legislators and staff.

Legendary singer and performer Michael Martin Murphey will sing the iconic Western song, “Home on the Range,” for the opening of the Kansas State Senate. Murphey, best known for his huge hits “Wildfire,” “Carolina In The Pines,” “Long Line of Love,” “Geronimo’s Cadillac,” “Cowboy Logic” and more, has been a tireless advocate for the preservation of western culture, and worked to help preserve the cabin where Dr. Brewster Higley VI wrote “Home On The Range” in 1872.

Located in Smith County, Kansas, the home has been authentically restored and is now a popular tourist stop.

The film tells the story of the song, the cabin and the lawsuit that determined its origins. It has attracted both well-known actors and accomplished musicians as well.

In addition to Murphey, the film features the talents of Rance Howard, Buck Taylor, Darby Hinton, Skip Gorman, Mitch Holthus, Mark Mannette and many others, including several local actors. Musicians contributing to the project include the legendary rock band Kansas, Skip Gorman, John McEuen, Jed Marum, the Sons of the Pioneers and many more.

The film was directed by Ken Spurgeon and was filmed in Smith Center, El Dorado, Topeka and Wichita, Kansas.

Lone Chimney Films, Inc. is a 501c3 not for profit educational film company based out of Kansas.

The film is sponsored by the Kansas Humanities Council, The People’s Heartland Foundation, Emprise Bank, Northfield School of the Liberal Arts, Philip and Becky Elder, Jim Graf, The Murphey Western Institute, The Logan Foundation, Jim and Bev Mershon, ITC Holdings, Russ and Ilene Briggs, Carl and Jeanette Christman, Russell and Margaret Bomhoff and the generous donations of many others.
Posted by LovinLyrics at 9:59 AM