"THE DAILEY & VINCENT SHOW" RETURNS TO RFD-TV DUE TO POPULAR DEMAND, PLUS CATCH GRAMMY NOMINATED DUO ON SIRIUSXM'S BLUEGRASS JUNCTION THIS WEEKEND 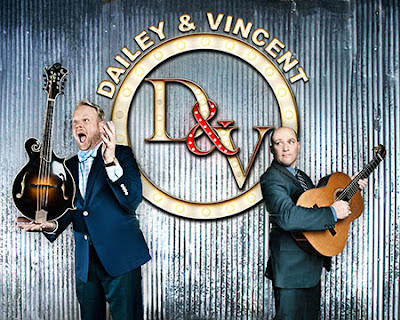 Momentum for Dailey & Vincent continues this year with another career first - an exhibit opening celebrating their success at the world-renowned International Bluegrass Hall of Fame and Museum. “A Decade of Dailey & Vincent: An American Music Journey” features artifacts and memorabilia from the IBMA award-winners decorated career as a duo and beyond, including instruments, clothing, awards and pictures. The International Bluegrass Hall of Fame and Museum is located in Owensboro, Kentucky.

SiriusXM’s Bluegrass Junction (Ch. 62) will also rebroadcast Dailey & Vincent's 10th anniversary celebration from the International Bluegrass Hall of Fame and Museum on Saturday, January 21 at 12:00pm CT and Sunday, January 22 at 5:00pm ET.  In addition to a show-stopping performance, 100 lucky fans in attendance also got the opportunity to witness a live intimate concert + Q & A with the Grammy®-nominated band.

So far, 2017 has proven to be a career-defining year for the superstar duo, who will be formally inducted as the newest members of the Grand Ole Opry on March 11.  The announcement came on Dailey & Vincent’s 10th anniversary as a duo, where they originally made their debut on the Opry at the Ryman in 2007. The rest of the year includes a jam-packed tour schedule including Dailey & Vincent’s third performance at the historic Carnegie Hall, a return at the legendary Ryman Auditorium, along with their annual headlining music festival Dailey & Vincent LandFest in the Mountains presented by Springer Mountain Farms in Hiawassee, Georgia September 14-16 (tickets available HERE).
Posted by LovinLyrics at 1:13 PM