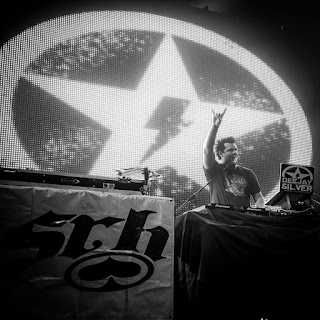 Groundbreaking DJ/remixer/producer DEE JAY SILVER has grown to become one of country music's biggest influencers and busiest entertainers, and 2017 is lining up to be one of his biggest yet. The Nashville-based artist and host of his own nationally syndicated radio show "The Country Club with Dee Jay Silver" has officially announced his initial plans for the year, with appearances throughout Super Bowl 51 Weekend, multiple residencies, country music festival dates, and another cross-country tour with Jason Aldean, among many other endeavors. See below for a full list.

DEE JAY SILVER--the first and only DJ to be signed to a major Nashville record label, RCA Nashville/Sony Music--released his first original single, "Just Got Paid," this past July. The infectious ode to the weekend--described by MusicRow's Robert Oermann as "funky, slinky and groove-soaked" that's "a relaxing, mid-tempo ditty, tailor made for after-work Fridays" (8/19/16)--features vocals from indie singer-songwriter Austin Webb, who co-wrote the song with SILVER in Nashville. Of the song, Billy Dukes from Taste Of Country added that, "the veteran proves he has a finger on the pulse of the country community...guitar and drums dominate this summer afternoon delight, remarkable for its humble production and airy arrangement" (8/22/16). Upon its release, "Just Got Paid" was featured on SiriusXM The Highway's "On The Horizon" show as well as SILVER's own nationally syndicated weekly radio show heard on almost 90 stations, including some of the leading country and iHeartMedia radio stations throughout the U.S., every Friday and Saturday nights. The single has already racked up over 440,000 plays on Spotify.

Here's where you can find DEE JAY SILVER:

SUPER BOWL 51 WEEKEND: Before the Falcons and Patriots take the field in Houston, DEE JAY SILVER will spin for multiple crowds throughout the weekend at a couple of private events such as the HSBHC Luminaries of the Game (February 1) and Super Bowl 51 Pre-Game Party at NRG Center (February 5). Additionally, he'll be headlining The Dogwood (2403 Bagby St.) on Saturday, February 4 for a night party that is open to all.

RESIDENCIES: Throughout the year, DEE JAY SILVER will once again host multiple residencies in Las Vegas returning to the Rehab Pool at the Hard Rock Hotel & Casino for his third consecutive year and the Foundation Room at Mandalay Bay for a second year. SILVER will also host a residency at the Foundation Room in Dallas, with more to be announced.

FESTIVAL APPEARANCES: DEE JAY SILVER returns to the stage at the following country music festivals this year, with more to be announced: Carolina Country Music Festival (June 8-11 in Myrtle Beach, SC) and Big Valley Jamboree (August 3-6 in Camrose, Alberta, Canada). Additionally, SILVER will host the iHeartCountry Music Festival After Party at the Summit Roof Top in Austin, TX on May 6.

HEADLINING SPECIAL EVENTS: Having already performed at the College Football Playoff National Championship in Tampa and PBR Louisville earlier this month, DEE JAY SILVER also has many special events on the horizon, from a public show at the PBR Bar in St. Louis March 3 to private parties for Jack Daniel's May 15-16.

For all the details on upcoming tour dates and the latest updates, go to www.deejaysilver.com/tour/.
Posted by LovinLyrics at 12:52 PM