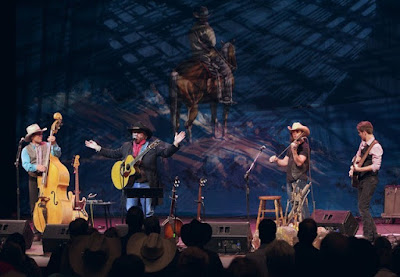 After 24 years, American Music Legend Michael Martin Murphey and his Rio Grande Band continues to sell out venue after venue with his beloved Cowboy Christmas Tour.


"It's incredibly humbling that our fans come out to see our show year after year," said the singer best known for hits such as "Wildfire," "Carolinan In The Pines." "Their continued support means more than any award I've ever been given."

Since the tour began in late November, Murphey has had to add performances (which also sold out) in markets like Lubbock, TX, Fredricksburg, TX and Lone Tree, CO and sold out single shows in Lufkin, TX, New Braunfels, TX, Uvalde, TX, Caldwell, TX and Amarillo, TX.

Before Christmas Day, he will have appeared in 12 cities in Texas, Oklahoma, New Mexico and Colorado. Tickets were moving briskly long before the tour began.

The touring tradition was born in the early 1990s, when Murphey produced an album of
cowboy Christmas songs (he has since produced two holiday-themed albums and one DVD, all available on his website), and has developed into the multi-media production it is today.

For nearly a quarter of a century, Murphey has celebrated the cowboy connection to Christmas. “There is a special relationship the Christmas story has to rural communities, farmers and ranchers,” Murphey observes. “God first sent an angel to livestock people — the shepherds in the field. Whether you’re a believer or not, the story emphasizes the fact that the news of the birth of the Savior of the world is not given to the royalty or politicians, but it goes to the lowest people on the totem pole.
"To me, this is an underscoring of the fact that Jesus came for all people, all races and all classes,” he continues. “Jesus is also traditionally depicted as a shepherd, and many of his parables are agricultural stories about farming, livestock and how the earth works. That means that rural people should feel a significant part of the Christmas message because they were chosen to hear that story first."

Murphey has been a major part of America’s musical landscape for four decades. His huge hits include “Wildfire,” “Carolina In The Pines,” “Long Line of Love,” “What’s Forever For,” “Geronimo’s Cadillac” and “Cowboy Logic.” A multiple Grammy nominee and an inductee into the Western Music Hall of Fame, the Texas Country Music Hall of Fame and winner of the Texas Music Award for Best Album, Murphey is a working cowboy who embraces and celebrates what he calls the cowboy culture —a life based on faith, family, hard work, and a passion for conservation and the environment. He says that this philosophy has a strong impact on his holiday show, as does his own family background.