THE OAK RIDGE BOYS HAVE STARTED A MUCH NEEDED REVIVAL WITH THEIR NEW CD, "17TH AVENUE REVIVAL" 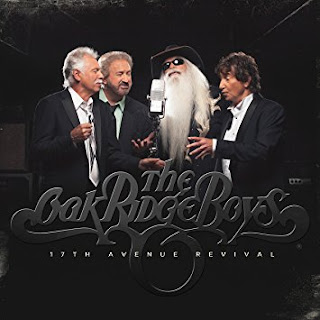 By definition, a "revival" is a reawakening, a restoration of force or validity. The Oak Ridge Boys named their latest project "17th Avenue Revival" for a reason because that's exactly what they knew this collection of the perfect songs, produced by the perfect person was going to be just that, the revival that we needed. This new CD is unlike any other these legends have released and even though the CD doesn't officially hit shelves until March 16, the reviews are coming in droves of nothing but positive reaction. I think the Boys have finally outdone themselves and that's pretty hard to do.

I remember speaking to Duane Allen in their Hendersonville, TN office last September during a personal trip to Nashville and they had just completed recording and were out starting to talk to people around town about the CD. He told me this was going to be something special, something different and something that would be talked about for a long time. He said it wasn't a typical Oaks release, it had that something different that reached out to multi-genres and various age groups. He was so proud but I don't think even he knew how understated he was at that time. This CD is OUTSTANDING. It's a result of four men believing in every word they sing and in wanting to revive a message of unity and coming together and it's the result of the vision of one of country music's most amazing producers, Dave Cobb, who knew just what the Oaks were wanting to do and how they wanted it to sound.

"17th Avenue Revival" has given us a return to that southern gospel sound that The Oak Ridge boys are known and respected for, it's brought us back full circle to the kind of music that only the Oaks can pull off in only a way that the Oaks can pull off. This CD is exactly what we needed, at the exact time in this world when we truly need something to get us back on our feet and rejoicing again and giving us reason to bow our heads in gratitude for the multitude of blessings we sometimes forget we've been given. Well written music with a message is one of those blessings that seems to get lost in today's country. This CD is a blessing to any country music fan who appreciates a story and great lyrics and with tracks written by artists such as Jamey Johnson, Ashley Monroe, Vince Gill, Buddy Cannon, Brandy Clark, Shane McAnally, and other songwriting royalty, it's a reason to say thank you. It's a reminder that God isn't forgotten, that He hasn't been cast aside and that His presence is brighter than ever and it's put forth in such a way in this CD that it's not really "religious", it's just simply apparent. It puts faith back in country music, a place where it has always been welcome. The Oak Ridge Boys have made that light shine again in country music and made us want to jump to our feet and yell "Hallelujah and Pass the Cornbread! Now THIS is some good music y'all!" Even if you're not a religious person, this will still get ya in right in the spirit.

"Pray to Jesus", written by one of country's best storytellers, Brandy Clark, and Shane McAnally who pretty much has written most of the hits on today's charts, has been called one of the "Best Songs of The Week"of Feb 23, 2018 by Rolling Stone. We loved it on Brandy's debut CD and we love it even more now.

The CD is set for release on March 16. You can pre-order your digital copy now on most outlets or you can order the physical CD, collector's vinyl, or even cassette at www.oakridgeboys.com. (They even donated a special Edison cylinder version to the Country Music Hall of Fame! How awesome is that???)

Connect with the Oaks online

Posted by LovinLyrics at 5:16 PM