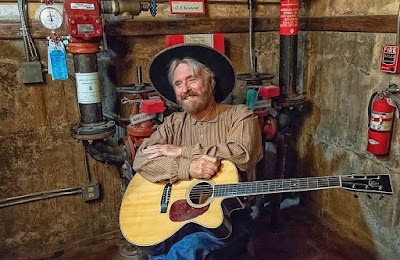 Murphey, well known for his outspoken passion for the Western Lifestyle, will receive the Lifetime Achievement Award in recognition of his nearly 50 years producing celebrated Western music.

“In the Old West, songs were shared by pioneers, cattlemen, ranchers, painted ladies and even gunslingers as a way of keeping the West alive,” Murphey said. “I have always been drawn to songs about the love of the land, the strength of the prairie folks, the dusty trails, the mythic tales and the legends of a bygone era. I have always admired Westerners for their stubborn determination and deep love of life. That’s what I celebrate in my music.”

“In the past few decades, no musical artist has done more to chronicle, preserve and further the cowboy culture than Michael Martin Murphey,” observed noted music critic Dave McGee. “His music overflows with life, enough for many of us. To saddle up with Murph is to come in closer touch with enduring truths.”

“Few people are as dedicated to preserving the heritage and beauty of the American West quite like Murphey,” echoed Cowboys & Indians magazine. “Through his music he tells the stories and romance of the Native Americans, cowboys, horsemen, ranchers, outlaws and lawmen. But Murphey has gone beyond storytelling through active involvement in the conservation of the relics and the landscape that define his most treasured region.”

Although Murphey first gained national attention on the pop music scene, he has remained true to his Western roots with hits like "Wildfire" and compositions like "Land of Enchantment ( New Mexico)." The former was a major commercial success and the latter is the “Official State Ballad of New Mexico.”

Born in Dallas, Texas, Murphey began his musical career in folk, pop and "outlaw" country music. Following a successful beginning as a songwriter in California where his songs were recorded by the likes of Kenny Rogers and The Monkees, Murphey returned to his native Texas where he, along with Jerry Jeff Walker, Gary P. Nunn and others, gave rise to the Austin Music Scene. Known as the “Cosmic Cowboy Movement” (named for Murphey’s popular song, “Cosmic Cowboy”), the movement set the stage for the Willie Nelson / Waylon Jennings led Outlaw Movement. His current release, Austinology • Alleys of Austin, is a nod to the music that made Austin an American music center.

“Murphey was a key player in the Austin phenomenon,” Craig Havighurst of WMOT — The String recently said. “Murphey, along with Willie Nelson, Jerry Jeff Walker and others forged a country-rock hybrid that became the foundation for the progressive folk music field we now call ‘Americana’.”

Moving to Colorado in 1975, Murphey scored a massive pop hit, "Wildfire" on his landmark album, Blue Sky/Night Thunder. More hit records followed — including “Carolina In The Pines,” “Geronimo’s Cadillac,” “Long Line of Love,” “What’s Forever For,” “Cowboy Logic” and more — but in 1986, he branched out by launching WestFest, an event that would lead the way in the revival of interest in all things Western. This outdoor festival, repeated in many Western locations and almost annually since then, brought together Western artisans, American Indians and musicians representing several genres but with a focus on the West, and made all of this accessible to the public.

In 1990, he convinced his record label, Warner Brothers, to let him record an album of Western songs, Cowboy Songs, Vol 1. Reluctantly, the executives agreed, and were pleasantly surprised w hen the project earned Murphey a Gold Record.

More Cowboy Songs CDs followed, as did Warner's formation of a new subsidiary label, Warner Western. The new label, at Murphey’s suggestion, recruited some of the best Western talent around, artists Murphey had met at Western gatherings in the late 1980 and early 90s, and a new series of Western music releases was started. This gave national attention and product distribution to artists who had only gained regional recognition up to that point, and eventually led to the launch of other record companies.

This past holiday season Murphey took his 25th Annual Cowboy Christmas tour to some 20 cities, celebrating the uniqueness of the Western Christmas. His Murphey Western Institute is a center for the education, preservation and perpetuation of the arts, culture, history and legacy of the American West.

“In the years following the end of the singing movie cowboy era, especially during the 1970s and 80s, national interest in Western music declined,” said O.J. Sikes in American Cowboy magazine. “It might have been lost had it not been for the successful efforts of a few artists and organizers like Murphey who were dedicated to the preservation and continuation of Western music. With his talent, his vision and his dedication, Michael Martin Murphey played a major role in the revival of Western music.”

Other individuals being recognized this year include legendary Hollywood actor Kevin Costner, who will be inducted into the Hall of Great Western Performers, three-time world champion steer roper (and father of Country Music icon Reba McEntire) Clark McEntire, cowboy and former slave who discovered the first Folsom archaeological site, George McJunkin. Noted cowboy entertainer and musician Dave Stamey will be presented with the Chester A Reynolds Award, bestowed on a living honoree who has demonstrated an unwavering commitment to Western values and ideals.
Posted by LovinLyrics at 12:19 PM