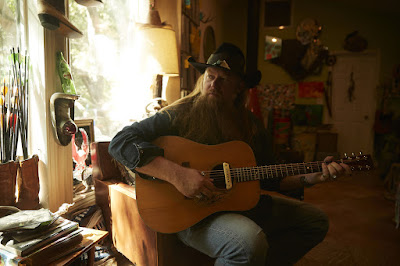 The Country music scene has its eye on singer-songwriter Gethen Jenkins as the next up-and-coming Outlaw Country artist with the release of his debut album, Western Gold, via RED MUSIC/Five Music, Friday, July 26. The former U.S. Marine who served for eight years during Operation Iraqi Freedom, exclusively premiered his debut single “Bottle In My Hand” on Billboard, catching the attention of the music industry with his captivating story: “I made a promise to myself when I went overseas with a bunch of people from my platoon," shared with Billboard, "we promised that we were gonna give music a shot when we got back…So we did.”

Recorded in Nashville’s Spunik Studio, Jenkins’ was in good company while creating the album, landing 4-time Grammy Award winner Vance Powell as the producer. Powell is known for his work with Chris Stapleton, Jack White, Buddy Guy and more. Jenkins praises Powell saying, “He’s a freaking genius,” and, ”an amazing guy to work with.” Born in West Virginia and raised in rural Alaska, the full-length album showcases Jenkins’ songwriting on each track while highlighting the whiskey-soaked honkytonk sound Jenkins’ grew up on, citing Haggard, Billy Joe Shaver, Charlie Daniels, Waylon Jennings and even Pearl Jam as his greatest influences.

The Outlaw’s upcoming single “Basket Case” will be released Friday, June 21. The track was inspired by his time in the Marine Corps, leaving the military and feeling relatable to a basket case motorcycle (a motorcycle built from scrap pieces). Through his West Virginia roots, Jenkins quickly connected with Kentucky-born songwriter, Aaron Raitiere, “He’s a wild Kentucky boy!” Jenkins says of the writer, “[we] have that West Virginia-Kentucky connection.” Raitiere’s most recent cornerstone includes writing “I’ll Never Love Again” with Lady Gaga, Natalie Hemby and Hilary Lindsey for the blockbuster A Star Is Born.

The theme of using drinking as a remedy of heartache is at the forefront of the album with tracks like “Bottle In My Hand,” “Whiskey Bound,” and “Me, My Bottle and Nothing But Time” following suit. The music video for “Bottle In My Hand” is set in a dive bar - as every good country song should be – singing, “I be here drinking, Just as hard as I can, Making brand new memories, With two great old hands.”

The 6’5” Grizzly Adams look-a-like celebrates strong women in tracks “Maintenance Man” and “Strength of a Woman,” highlighting the power a warm touch of a woman holds saying, “
After serving eight years in the U.S. Marines, Jenkins settled down in Southern California, where he has built a dedicated fan base, being honored with the Male Vocalist of the Year and Album of the Year awards at 2017's California Country Awards. Recently, he was named a Top 10 Country/Americana Artist in Los Angeles County by LA Weekly and 2018’s Best Outlaw Country Artist.

The singer released a six-song EP titled Where The Honkytonk Belongs in July 2017, and the project gained airplay on Sirius XM’s Outlaw Country, as well as becoming one of the top-selling Outlaw Country albums on iTunes.

Jenkins has played over 1,000 live shows, sharing the stage with prominent country acts such as The Marshall Tucker Band, Billy Joe Shaver, Wanda Jackson, David Allan Coe, Asleep at the Wheel, Shooter Jennings, Dale Watson, Whitey Morgan and many more. Gethen has been touring in support of Western Gold, stopping in major markets like Dallas, Kansas City, Nashville, and Chicago as well as several festivals across the country including the 42nd Annual Redwood Bike Run, HorseThief The Festival, and A Day In The Country.