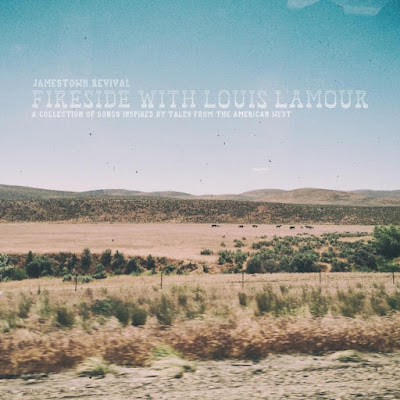 Purchase or stream Fireside With Louis L’Amour
When the recording process of their new EP, "Fireside With Louis L’Amour", was all said and done, Jonathan Clay and Zach Chance of Jamestown Revival took on the challenge of distilling a half-dozen tales from "The Collected Short Stories of Louis L’Amour, Volume 1: Frontier Stories" from 30-page adventures down to three and a half minute songs. Their tune “Bound for El Paso” comes from L’Amour’s “The Gift of Cochise,” “Fool Me Once” was inspired by “The Man from Bitter Sands,” and so on. Longtime fans of Jamestown Revival haven’t had to listen very hard to hear L’Amour’s influence on Clay and Chance, but this is the first time they have tipped their hats directly to America’s beloved frontier storyteller. The whole of Fireside With Louis L’Amour—six songs in total—was directly inspired by individual stories from L’Amour’s Volume 1 collection, allowing listeners to trace the precise roots of Jamestown Revival’s newest release.
“They say that L’Amour was the master of the short story and we would humbly agree. In 30 pages he manages to draw you in, make you invest in the characters, and oftentimes hit you with a twist that you truly didn’t expect,” say Clay and Chance. “The songs on Fireside With Louis L’Amour are our attempt to put a musical spin on some of Louis’ short stories found on The Collected Short Stories of Louis L’Amour, Volume 1: Frontier Stories. It’s been challenging and incredibly rewarding.” To have the family of L’Amour on board was just icing on the cake for Jamestown Revival. “On top of that, it’s been an absolute honor to have the blessing of Louis’ son, Beau, and the L’Amour estate. We hope these songs inspire you to pick up The Collected Short Stories of Louis L’Amour and read the true inspiration behind the music,” they say, before adding, “We also feel it’s worthwhile to mention these songs should be best enjoyed sitting next to a fire with a nip of whiskey in the glass.”
Garden & Gun premiered the live performance video of album-opener, “Bound for El Paso.”
“If you’re a L’Amour fan, you’ll no doubt recognize what’s been distilled from story to song,” said Cowboys & Indians Magazine. “And you’ll love what happens when two Texans get a hold of America’s storyteller and let their imaginations and harmonies run.”
Fireside With Louis L’Amour Track Listing:
1. Bound for El Paso
2. Fool Me Once
3. The Ballad of Four Prisoners
4. The Killing Type
5. Beyond the Ridge
6. Prospector's Blues
Posted by LovinLyrics at 1:17 PM