THANK YOU FOR SHARING YOUR WORDS, YOUR EXPERIENCES, YOUR HEARTBREAK AND YOUR JOY. YOU CHANGE LIVES WITH EVERY WORD. 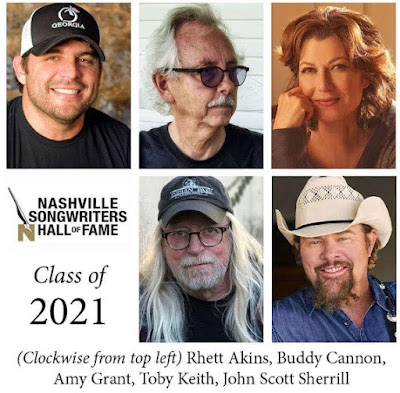 The Nashville Songwriters Hall of Fame (NaSHOF) has announced its Class of 2021: Amy Grant, Toby Keith, Rhett Akins, Buddy Cannon and John Scott Sherrill. The five will be inducted into the Hall this November, according to an announcement made today by Sarah Cates, chair of the organization’s board of directors, and Mark Ford, its executive director.
The five new inductees-elect will join the 213 previously inducted members of the elite organization when they are officially inducted during the “50/51” Nashville Songwriters Hall of Fame Gala on Monday, November 1, at the Music City Center. Because the organization’s 50th Anniversary celebration was postponed last year, this year’s event will honor two classes in a special double-sized event that will also spotlight NaSHOF’s previously named Class of 2020: Steve Earle, Bobbie Gentry, Kent Blazy, Brett James and Spooner Oldham.
"Today is one of my favorite days of the year, as we begin our journey to the Nashville Songwriters Hall of Fame Gala in November with the announcement of our upcoming class,” says Cates. "Nashville has always been the home of legendary songs written by the world’s finest songwriters – and this class is no exception. It’s our great honor today to welcome our class of 2021: Rhett Akins and Buddy Cannon in the songwriter category; John Scott Sherrill in the veteran songwriter category; Toby Keith as our songwriter/artist and Amy Grant as our veteran songwriter/artist.”
Rhett Akins’ songwriter credits include his own “That Ain’t My Truck,” as well as “Honey Bee” (Blake Shelton) and “It Goes Like This” (Thomas Rhett). Buddy Cannon’s resume is known for “Set ’Em Up Joe” (Vern Gosdin), “I’ve Come To Expect It From You” (George Strait) and “Give It Away” (George Strait). John Scott Sherrill’s hits include “Wild And Blue” (John Anderson), “The Church On Cumberland Road” (Shenandoah) and “How Long Gone” (Brooks & Dunn). Amy Grant popularized many of her own compositions, including “Baby Baby,” “That’s What Love Is For” and “Tennessee Christmas.” Toby Keith recorded many of his self-penned hits, including “Should’ve Been A Cowboy” “How Do You Like Me Now?!” and “As Good As I Once Was.”
The Nashville Songwriters Hall of Fame Gala is one of the music industry’s premier events of the year. The evening features tributes and performances of the inductees’ songs by special guest artists. In recent years artists such as Garth Brooks, Luke Bryan, Jimmy Buffett, Ronnie Dunn, Emmylou Harris, Alan Jackson, Little Big Town, Tim McGraw, Thomas Rhett, Blake Shelton, Marty Stuart, Taylor Swift, Josh Turner and Trisha Yearwood have performed at or participated in the event.
The Hall of Fame Gala benefits the nonprofit Nashville Songwriters Foundation. Starting in September, select public seating may be purchased as available by contacting Executive Director Mark Ford at mail@nashvillesongwritersfoundation.com or 615-460-6556.
About the Nashville Songwriters Hall of Fame:
Induction into the Nashville Songwriters Hall of Fame is one of the nation’s most highly prized songwriting achievements. Since 1970, the Hall has enshrined more than 200 of the greatest writers from all genres of music ever to put words to music in Music City, including such luminaries as Bill Anderson, Bobby Braddock, Garth Brooks, Felice & Boudleaux Bryant, Johnny Cash, Don & Phil Everly, Harlan Howard, Kris Kristofferson, Loretta Lynn, Bob McDill, Bill Monroe, Willie Nelson, Roy Orbison, Dolly Parton, Dottie Rambo, Jimmie Rodgers, Fred Rose, Don Schlitz, Cindy Walker and Hank Williams. Operated by the non-profit Nashville Songwriters Foundation, the Hall of Fame is dedicated to honoring Nashville’s rich legacy of songwriting excellence through preservation, celebration and education. More information is available at http://www.nashvillesongwritersfoundation.com/.
Posted by LovinLyrics at 6:31 PM